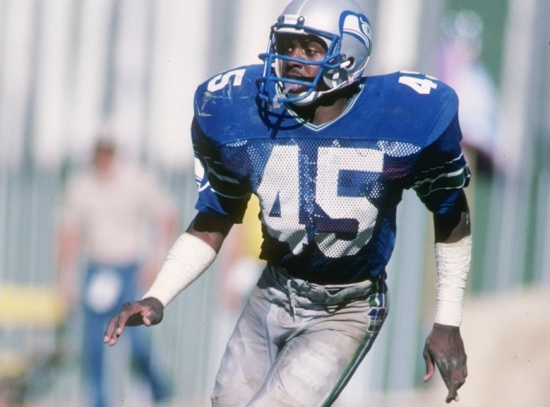 A star player with UCLA, Kenny Easley was the fourth overall pick by the Seattle Seahawks in 1981.

Easley came in with high expectations, which he showed off with a good rookie season where he was their starting Strong Safety.  That good start was followed with a four-year run where he was considered to be the best, or among the best Defensive Backs in the game of pro football.  Easley went to the Pro Bowl in four straight years (1982-85) with a fifth in 1987, and he was also a three-time First Team All-Pro (1983-85).  His best year was in 1984, where he was a Defensive Player of the Year, the first Seahawk to win the honor.  That year, he led the NFL in Interceptions with ten and would have 32 over his career.

Easley was vocal during the 1987 strike, and it is believed by some that was why he was traded to the Cardinals in the off-season.  The trade did not stick, as Easley flunked the physical, and it was learned that he had kidney problems, which forced him out of football.  He would later sue the Seahawks that overuse of Advil prescribed due to an ankle issue, led to his kidney problems.  After an out of court settlement, the two parties reconciled, and Easley was inducted into their Ring of Honor.

Easley would be inducted into the Pro Football Hall of Fame in 2017.