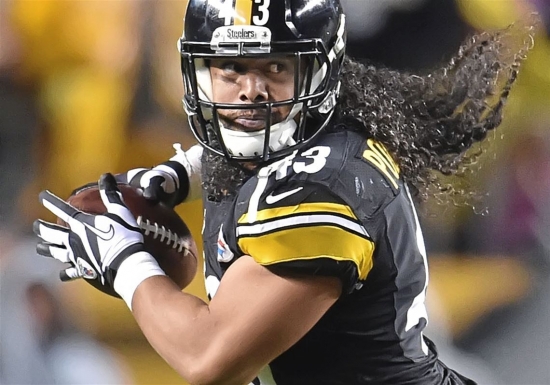 In terms of recent popularity, it is hard to come up with a player who exceeds Troy Polamalu.

The star from USC was a First Rounder in 2003, and after a rookie year as a backup, he would become Pittsburgh's starting Strong Safety from 2004 until his retirement in 2014.  In his sophomore season, Polamalu was named to the Pro Bowl, and would be again the next four years.  In that half-decade run of Pro Bowls, Polamalu was a First Team All-Pro twice and helped the Steelers win their fifth and sixth Super Bowl.

The former Trojan was hurt for most of 2009, and he rebounded in 2010 with another First Team All-Pro and the Defensive Player of the Year Award.  This season, the Safety had seven Interceptions and a career-high 19 in Approximate Value.  Polamalu would be a First Team All-Pro one more time, and played until 2014, finishing his career with 32 Interceptions and 782 Tackles.

Polamalu would be selected for the Pro Football Hall of Fame in 2020, which was his first year of eligibility.