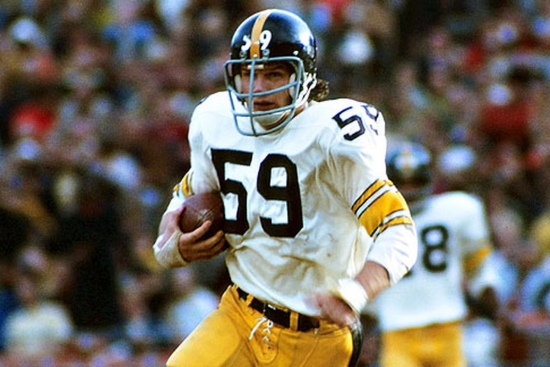 A 1971 Second Round Pick from Penn State, Jack Ham brought a speed dynamic to the Linebacking corps of the Pittsburgh Steelers.

Ham became a starter at Left Linebacker as a rookie, and in 1973, he began an eight-year streak as a Pro Bowler.  The former Penn State Nittany Lion was a nuanced player who was equally great at pass-rushing and playing in the back as well as any Safety.  Ham was one of the most explosive players, and if he was ever caught out of position, he had the blazing speed to rectify it.

A six-time First Team All-Pro (1974-79), Ham was a huge part of the Steelers' success in the 1970s, capturing four Super Bowl Rings.  Ham also had four years where he was in the top ten in Approximate Value.

Ham played until 1982 and had 25 "unofficial" Sacks along with 32 Interceptions.  The Pro Football Hall of Fame elected him in 1988, and he was inducted as part of the inaugural Steelers Hall of Honor in 2017.