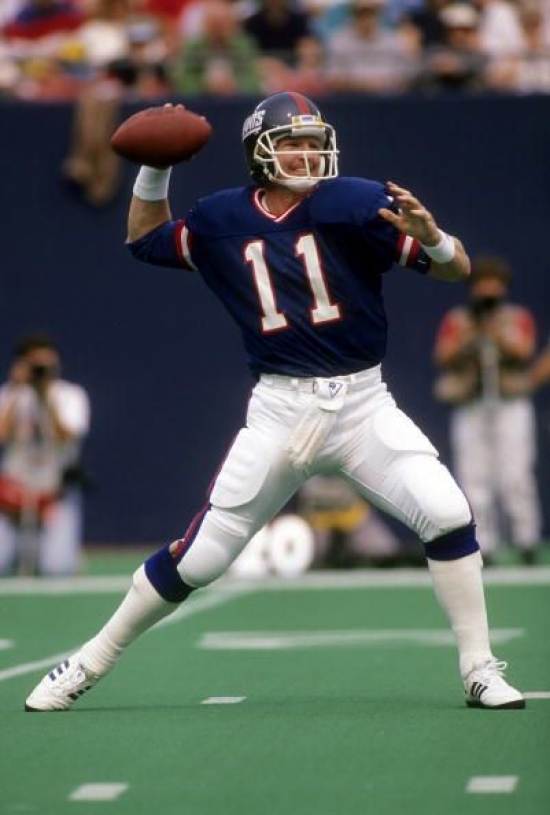 When it was all said and done, Phil Simms is considered one of the best Quarterbacks in the history of the New York Giants.  During the first five years of his career, it sure didn’t feel like that was possible.

Simms was drafted no.7 overall in 1979, and he was an All-Rookie, but had a respectable sophomore year but was injured late in the 1981 season.  A pre-season injury to his knee in 1982 kept him out of the entire season, and he lost his starting QB job to Mark Brunner.  He relieved Brunner in the sixth game of the year, but it was short-lived as he suffered a severe thumb injury that day.  Again, he was out for the rest of the year, and as he entered 1984, Simms looked like he was a huge bust.  Or so it would seem.

In 1984, it clicked for Simms, who entered the season healthy and prepared, and he threw for 4,044 Yards and 22 Touchdowns. The Quarterback followed that with a Pro Bowl season, and the year after that, he was brilliant in their Super Bowl XXI win.  Simms was the MVP of the game, going 22 for 25 with 268 Yards and three TDs.

Following his Super Bowl win, Simms remained one of the better NFC Quarterbacks, and he was on his way to another Super Bowl until he had a foot injury, again taking him out for the rest of the year.  Jeff Hostetler filled in, and the Giants won Super Bowl XXV.  Simms had to fight to get his job back the year after, which he would win, and he finished his career in 1993, with a Pro Bowl year.