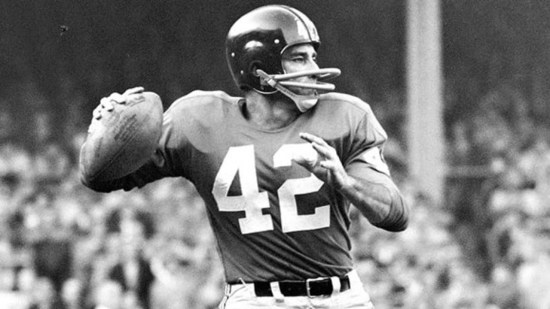 Conerly played his entire career with the Giants, but it was the Redskins who drafted him in with their 13th Round Pick in 1945. He never played for Washington, and it was not until 1948 when Conerly made his debut.  Conerly became one of the more productive QBs of the 1950s, finishing in the top five Passer Rating 10 times, leading the league in that stat in 1959.  That was the same season, where he was named the MVP by the Newspaper Enterprise Association.

Conerly would help the Giants win the 1956 Championship, and he was a part of bringing them to the Title Game in 1958 and 1959. "Chucking" Charlie Conerly may not have stats that look impressive today, but his 19,488 Passing Yards and 173-167 TD-INT ratio was excellent for his time.  Conerly's number 42 was retired by the organization in 1962.