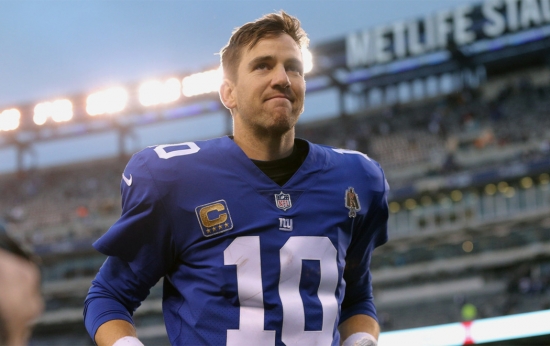 Eli Manning is one of the most polarizing players in Giants history, but that is predominantly the thought outside of New York.  For the most part, Giants fans will always celebrate the Quarterback who was at the helm of two Super Bowls, upsetting Tom Brady and the New England Patriots each time.

Manning played his entire pro career with the Giants (2004-19), where he started all but two of the 236 Games that he played. The product of Ole Miss took over as the starter in his second year, and from '05 to '18, he never had a year where he had less than 3,200 Passing Yards and 18 Touchdowns.  Manning was a Pro Bowl Selection four times, and his Passing Yardage exceeded 4,000 Yards seven times.

The overall stats for Manning were good, but as mentioned above, the two Super Bowl wins.  The Giants were underdogs in both games, and Manning pulled off heroics both times and winning and collecting a Super Bowl MVP per Super Bowl ring.

As of this writing, Manning is the Giants' all-time record in every significant passing metric.  He left the game with 57,023 Passing Yards and a TD-INT record of 366-244.  The GIants enshrined the QB to their Ring of Honor in 2021.