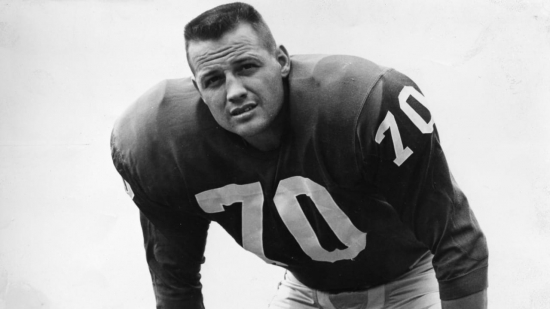 In Pro Football, the genius of football coaches cannot be undervalued.

In the 1956 Draft, the New York Giants took Sam Huff from West Virginia in the Third Round, but initially, they did not know how to input him into their lineup.  Huff was frustrated, and it was Vince Lombardi, who was an Assistant Coach, who persuaded him to stay through training camp while Defensive Coordinator, Tom Landry, devised a 4-3 scheme built largely around Huff.  Let's just say that two Hall of Famers begat another one.

Huff helped the Giants win the 1956 Championship, and play in five more.  Huff was considered by many to be the face of the Giants’ defense, and the Linebacker had four straight Pro Bowl appearances from 1958 to 1961.  Huff controlled the middle of the Giants defense until he shockingly signed with Washington after the 1963 season.

Huff secured 18 Interceptions as a Giant and was elected into the Pro Football Hall of Fame in 1982.