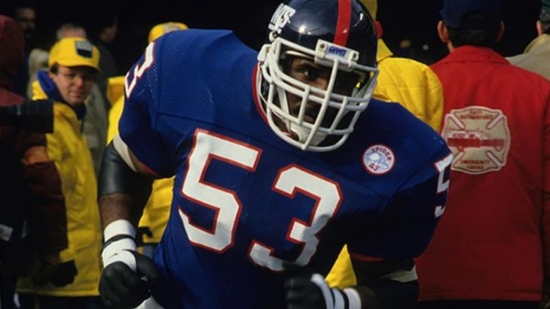 Before the New York Giants drafted Lawrence Taylor, they already had a feared Linebacker in Harry Carson, who they stole in the Fourth Round in 1976.

The former star from South Carolina State had a good rookie year, winning the starting Middle Linebacking role during the season. Two years later, Carson went to his first Pro Bowl and would repeat that honor eight more times.  The enigmatic defensive gem was quickly a leader and was one of their captains for ten of his thirteen years.

The run-stuffer was one of the greatest tacklers in franchise history.  Official records for Tackles were not kept, but he was often the team's leading tackler. With the arrival of Taylor, Carson was the leader of the Giants destructive "Big Blue Wrecking Crew," the defensive squad that propelled the team to a Super Bowl XXI win.

Carson played until 1988, retiring with 173 Games all played in a Giants uniform.  After being outspoken about how the Pro Football Hall of Fame is not decided by players or coaches, he eventually got inducted in 2006.