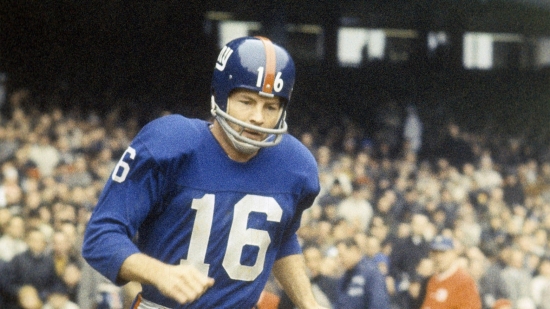 Frank Gifford was a former star at USC, and the Giants were lucky to grab him with their 11thOverall Pick in 1952.

Gifford played on both sides of the ball early in his career, but he would move mostly into an offensive role.  Playing at Half Back, Gifford was a multi-threat player, and from 1953 to 1959, he was a Pro Bowl Selection, with four of those years earning a First Team All-Pro Selection.

His best season by far was 1956, where he had a career-high of 1,422 Yards from Scrimmage, which also was enough to lead the NFL. That year, Gifford and the Giants would win the NFL Championship.  Gifford overall had 9,870 All-Purpose Yards, an incredible total for his era. Notably, he also threw 14 Touchdown Passes, the most ever for a non-Quarterback.

Gifford’s career was derailed by a Chuck Bednarik hit to the head that took out 18 months of his career.  He missed half of 1960 and all of 1961, but he came back as a Flanker for three more years in the NFL.

A member of the 1950s All-Decade Team, Gifford’s #16 was retired by the team.  He would later become a successful broadcaster, commentating on Monday Night Football for 27 years.  Gifford was inducted into the Pro Football Hall of Fame in 1977.