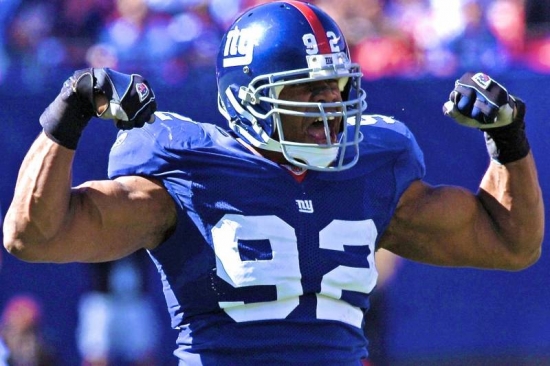 Michael Strahan was a star at Texas Southern, and the Giants took him in the Second Round of the 1993 Draft.  It turned out to be one of their best picks ever.

Strahan only played six games as a rookie due to injury, but he was healthy afterward, becoming a productive Defensive End for the next few years, but he was not considered a superstar.  That changed in 1997, when he broke out and became one of the best-known defensive players in football.

In ’97, Strahan went to his first Pro Bowl and earned First Team All-Pro honors with a 14 Sack year.  Strahan was now considered one of the top pass rushers, and he built on that with another First Team All-Pro in 1998 with 15 Sacks. After a couple of ordinary seasons, Strahan broke the single-season Sack record with 22.5, and he won the Defensive Player of the Year Award.  He also led the NFL in the new stat, Tackles for Loss (24).  In 2003, he repeated as the league-leader in Sack (18.5) and Tackles for Loss (23).  Strahan had a final Pro Bowl year in 2005 (his seventh overall) with his third TFL win (18).

While he was getting older, he was still a leader on and off the field.  Fittingly, he ended his career as a Super Bowl Champion, with his Giants shocking the previously undefeated New England Patriots for the title.  Strahan had a Sack in the big game.

Strahan was inducted into the Pro Football Hall of Fame in 2014.