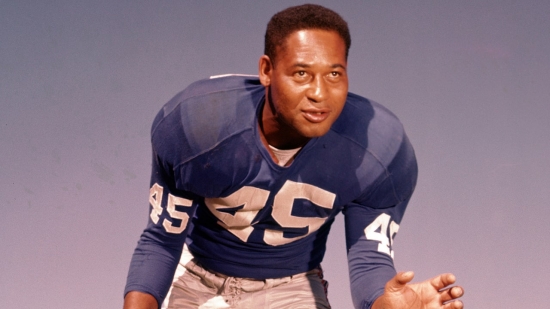 After playing at Toledo, a stint with the Coast Guard, and another college football run with Iowa, Emlen Tunnell would make Giants' history as the first African-American they signed.  As it would turn out, Tunnell would also become the best signing they ever did.

Tunnell blossomed into a ball-hawk petrifying Quarterbacks and infuriating Receivers for more than a decade.  From his rookie season to 1957, Tunnell never had a year where he had less than six Interceptions, and he peaked with a 10-INT year in 1949.  Tunnell was named to the Pro Bowl annually from 1950 to 1957, with four of those years also earning a First Team All-Pro spot.  He was also a vital part of a loaded Giants team that won the 1956 NFL Championship.

He would have 72 Interceptions over his Giants career, which remains a franchise record.  Overall, he had another seven with Green Bay, and he was the all-time leader in Interceptions at the time of his retirement.

Tunnell’s contract was sold to the Green Bay Packers after the 1958 Season.  He played under the legendary Vince Lombardi for three seasons, earning another Pro Bowl and a second NFL Championship.

He would enter the Pro Football Hall of Fame in 1967, and Tunnell would also be named to the NFL 100thAnniversary Team.