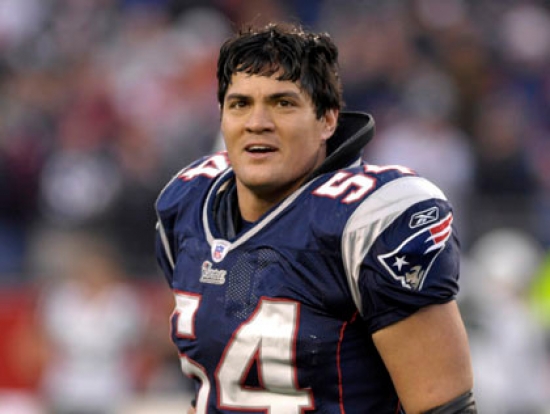 One of the most popular players in the history of the New England Patriots is Tedy Bruschi, and when you look at his career, how could he not be?

Bruschi played his entire career with the Patriots after being drafted in 1996, and after a few seasons in a minor role, he was promoted to a starting Interior Linebacker.  Bruschi would become a team captain and a leader of the team, helping them win their first three Super Bowls.  He was a nationally known player, going to the Pro Bowl in 2004, and securing Second Team All-Pro Selections in 2003 and 2004.

Bruschi suffered a stroke three days after playing in the Pro Bowl, and it was announced that he would sit out the 2005 season.  Astoundingly, he was able to come back in early November and finish the season, and he won the Comeback Player of the Year.

Bruschi played until 2008, finishing his career with 12 Interceptions, 30.5 Sacks, and 1,074 Tackles.  He holds the record for four consecutive Interceptions returns for a Touchdown, and he had five 100 Tackle years.  He may have only been a Pro Bowler once, but his work ethic epitomized the great teams of the New England Patriots.

Bruschi would later enter the Patriots Hall of Fame in 2013.