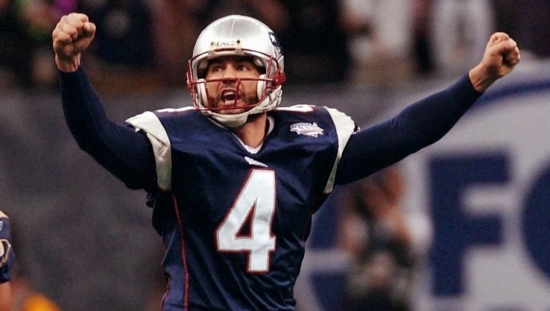 Undrafted from South Dakota State, Adam Vinatieri latched on with the Amsterdam Admirals of the World League before joining the New England Patriots in 1996.

Named an All-Rookie, Vinatieri became iconic in New England history when he tied the game 13-13 with a 45-yard Field Goal in a blizzard to send the game into overtime.  The Patriots would win the game and go on to win their first Super Bowl.  Vinatieri and the Pats went on to win two more Super Bowls, with the Kicker making clutch kick after clutch kick.

Vinatieri left the Patriots as a Free Agent to sign with Indianapolis, where he would win another Super Bowl.  He was the all-time leading scorer before Stephen Gostkowski passed him.

Vinatieri would be chosen for the 2000s All-Decade Team and the 100thAnniversary All-Time Team.