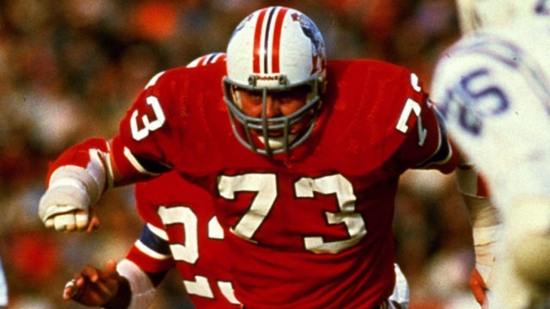 John Hannah studied his craft under the tutelage of Paul “Bear” Bryant at the University of Alabama, where he would become a two-time All-American.  He was coveted by all of the NFL teams, and the New England Patriots would select him with the fourth overall pick in 1973.

Hannah never played for any other team on the professional level, and he would start all 183 games for the Patriots.  Hannah played at Left Guard and was a Pro Bowl and First Team All-Pro in 1976.  In 1978, he was again named to the Pro Bowl and would repeat that every year until he retired in 1985.  In seven of those years, he was a First Team All-Pro.

Through the bulk of his tenure, whether the Patriots were contenders or not, Hannah was regarded as one of the top Offensive Linemen in the game. There was no weak part of his game, and he was an immediate leader not only on the line but of the entire team. When he was paired with Leon Gray, they were the best left side of the line, and it can be wondered what they would have done had Gray not been dealt to Houston.

Hannah would be named to the 1970s All-Decade, 1980s All-Decade Team, 75thAnniversary, and the 100thAnniversary Team. The Pro Football Hall of Fame would induct him in 1991, which was his first year of eligibility.   When the Patriots created their franchise Hall of Fame, in the same year, he was, of course, the first player selected.  Hannah's number 73 has also been retired by the team.