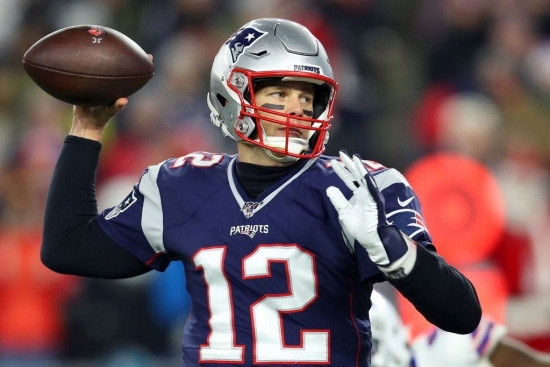 Who else could it possibly be?

Typically, this is the part where we go over the career of the player in question, but we will assume that you know the greatness of Tom Brady, the Quarterback who took the New England Patriots to six Super Bowl wins. We will go through his career, but if it seems like we are glossing over it, it is because we are.

There is just too much to tell you, and we have others we have to take time to write about.

Arriving as a sixth rounder from Michigan in 2000, Brady took over as the Patriots’ starting Quarterback early the season after following the injury to the incumbent QB, Drew Bledsoe.  Brady would go to the Pro Bowl, and take New England to their first Super Bowl win.

Over his nearly two-decade tenure as the Patriots' starting QB, he would not only win six Super Bowls but bring them to four others.  A four-time Super Bowl MVP, Brady won three AP MVPs, and went to the Pro Bowl fourteen times, with three years as a First Team All-Pro.

Statistically, Brady was spectacular. He would lead the NFL in Passing Yards three times, and with the Pats, he had 74,571 Yards with 16 of his seasons seeing the QB finish in the top ten in that stat.  Brady knew how to find the end zone throwing for 541 Touchdowns, with four seasons seeing him lead the NFL, and six other years finishing in the top five.  Brady was incredibly efficient, twice finishing first in Passer Rating, and his Interception Percentage also led the league four times.

There is no other player who has six Super Bowls.  As a Patriot, he never had a losing season as a starter. He took the Pats to 17 Division Titles. He threw for 541 Touchdowns and 74,571 Yards for New England.

Brady would be named to the 2000s All-Decade Team and the NFL 100thAnniversary Team.  Brady’s career in New England would end when he shocked the sporting world and signed with the Tampa Bay Buccaneers as a Free Agent in 2020, and promptly led them to a Super Bowl win.

With the Patriots, he was the GOAT.  His 280 in Approximate Value as a Patriot is higher than any other player in NFL history.

When the NFL does have a 200thAnniversary Team, can you see Tom Brady not being on it?  Us either.