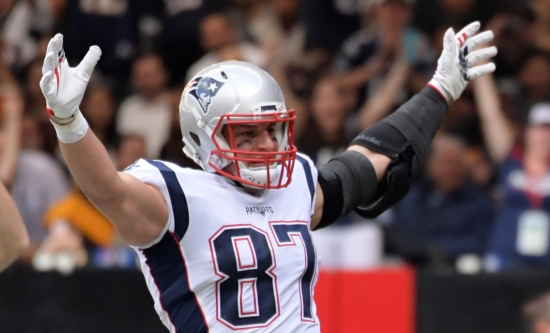 There have been a lot of great Tight Ends in football, but there is only one "Gronk."

Considered by some to be the best Tight End the game ever saw, Rob Gronkowski was not just a great player, but a larger than life character who transcended the sport.  An All-Rookie in 2010 after being drafted 42ndOverall from Arizona, Gronkowski used his size and tenacity to become a star.  Often injured, Gronkowski was a Pro Bowler five times and a First Team All-Pro four times, and had he been healthier, that number probably would have been higher.

The Gronk would lead the NFL in Receiving Touchdowns in 2011 (17) and had 79 overall with the Patriots 7,861 Yards over nine years.  In the playoffs, Gronkowski helped the Patriots win three Super Bowls, with him generating 12 Touchdowns and 1,163 Yards over 16 post-season contests.

Gronkowski retired early in 2019, and the year after, he was named to the NFL 100thAnniversary Team, though he would return when the Pats traded his rights to Tampa, where he joined his former Quarterback, Tom Brady.  The enigmatic one should be an early entrant into the Pro Football Hall of Fame.