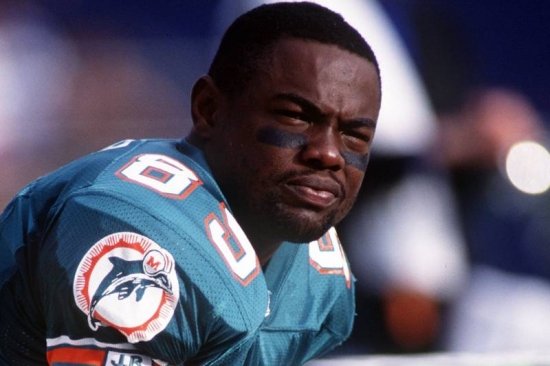 After being drafted from Northwestern State in the Second Round in 1982, Mark Duper only saw action in two Games as a rookie, but this would change when Dan Marino emerged as the Dolphins’ Quarterback.

Duper went from no receptions as a rookie, to 51 as a sophomore, with 1,003 Yards, and he went from that to 1,306 in his third year (1984), which coincided with Marino’s MVP year and their AFC Championship.  Duper was a Pro Bowl in both of those seasons, and he would do so again in 1986, with a career-high of 1,313 Yards.  That would be his last Pro Bowl, but not his last four-digit Receiving Yard year, as he cracked that mark again in 1991.

Duper played with the Dolphins until 1992, which would also be his final year in the league.

In terms of Receiving Yards, Duper was the most prolific Wide Receiver in Dolphins history as his 8,869 are first all-time.  He would also have 59 Touchdowns for the squad.  Duper, along with his fellow star Wide Receiever teammate, Mark Clayton, was inducted into the Dolphins' Honor Roll.