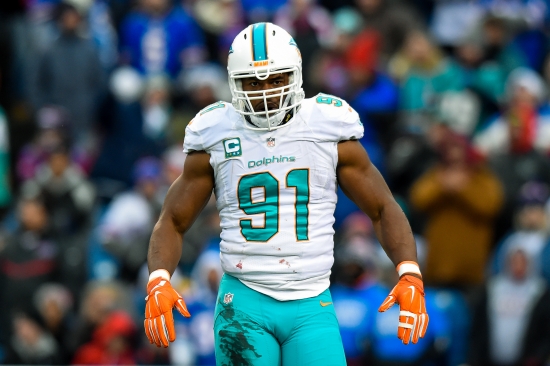 Cameron Wake had a good career at Penn State, but he went undrafted in 2005.  He received a tryout with the New York Giants but was unable to make the team.  Rather than give up, Wake found work in the Canadian Football League with the BC Lions, where he was a two-time All-Star and two-time Most Outstanding Defensive Player in as many years.  His work in Canada made him coveted by NFL teams, and he signed with the Miami Dolphins in 2009.

Wake only had one start in his first year in the NFL, but he was clearly destined to see more based on his pass-rushing skills.  Wake would start at Linebacker the next two years, with 2010 seeing him make his first Pro Bowl in a year where he led the NFL in Tackles for Loss (22).

In 2012, Wake shifted to Defensive End, where he would be named to the Pro Bowl in four of the next five years.  Wake was a First Team All-Pro in 2012, a year, he would have 15 Sacks, and notably, he had four other double-digit finishes in that stat.

Wake left Miami for the Tennessee Titans in 2019, and with the Dolphins, he finished two Sacks away from 100 and was three Forced Fumbles short of 100.