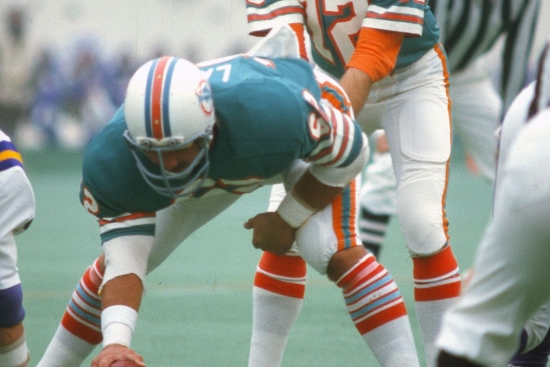 Jim Langer went undrafted in 1970 after a college career at South Dakota State, and after a failed attempt to make the Cleveland Browns, he found a home with the Miami Dolphins.  After a pair of non-descript seasons, Langer was about to rise to the top of the food chain of NFL Centers quickly.

Langer did not start in his first two seasons, but he would in 1972, and that was the year that he never missed a snap, and the Dolphins would go undefeated and win Super Bowl VII.  He would help them win Super Bowl VIII, and Langer marked that season with a six-year streak of Pro Bowl Selections, with four of those years earning First Team All-Pro Selections.  As the center of a dominant O-Line, Langer deserves a lot of credit for the offensive success that Miami had in the 1970s.

Langer played his final two seasons with the Minnesota Vikings, the team that he requested to play so that he could be close to his home.

Langer would enter the Pro Football Hall of Fame in 1987, in his first year of eligibility.  Three years later, Langer was part of the first group inducted into the Dolphins' Honor Roll.