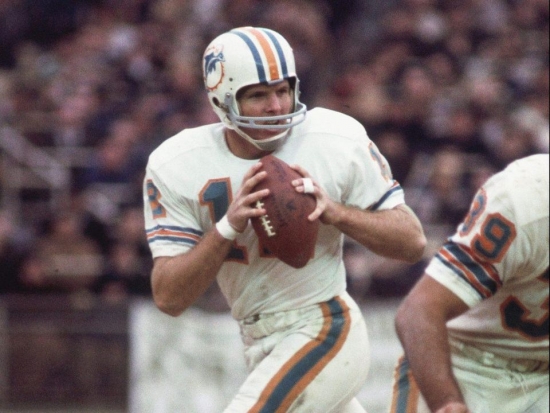 Following the merger of the NFL and AFL, Bob Griese was the first pick (4th Overall) by the Miami Dolphins, and he was one of the first pieces on what would become an eventual powerhouse.

The Quarterback from Purdue was an instant starter and would be an AFL All-Star as a rookie and sophomore.  The Dolphins would bring in Don Shula to take over as their Head Coach in 1970, and the Shula/Griese combo would take Miami to new heights.

A six-time Pro Bowl Selection in the 1970s, Griese took the ascending Dolphins to Super Bowl VI.  While Miami lost to the Dallas Cowboys, Griese was named by the Newspaper Ent. Assoc as their MVP.  The following season was the most interesting one (and rewarding) as he was injured in the fifth game.  Earl Morrall would come in, and Griese returned in the playoffs and would lead Miami in their first Super Bowl win when they beat the Washington Redskins.  Even though Griese did not play the whole year, he was integral to their undefeated season, which to date, is the only one in pro football history.  Griese became the first QB to appear in three Super Bowls in a row as he would win Super Bowl VIII in a win over the Minnesota Vikings.

Griese did not appear in another Super Bowl, but he was still a top-flight Quarterback.  He won the Bert Bell Award in 1977, the year he led the NFL in Passing Touchdowns and Passer Rating.  He played until 1980 and would enter the Pro Football Hall of Fame in 1990.  Griese would also be honored by the Dolphins when his number became the first one retired in franchise history in 1982, and eight years later he was part of the first group to enter the Dolphins' Honor Roll.