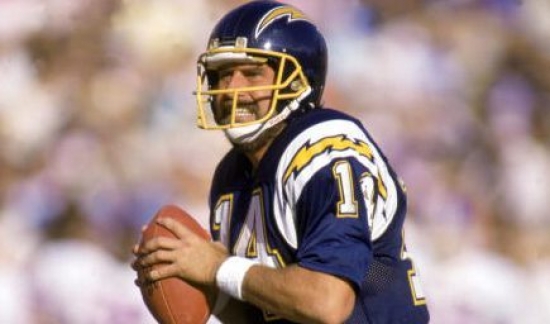 Dan Fouts played his entire pro career with the San Diego Chargers, and he was his arm that the passing mantra of Don “Air” Coryell was built on.

Fouts arrived as a Third Rounder in 1973, and his first five seasons in the NFL were not terrible, nor were they were impressive. This changed in 1978 when the Chargers named Don Coryell as their Head Coach.  Coryell believed in a high-octane, long pass system, and this enabled Fouts to use his complete skill set.

From 1979 to 1982, Fouts was the NFL’s most prolific passer, and he led the NFL in Passing Yards in all of those seasons. Fouts was the first player to throw for over 4,000 Yards in three straight seasons, and he was first in Passing Yards per Game in six different years.  The Quarterback would take the Chargers to AFC Championship Games, and he was named to the Pro Bowl in five consecutive seasons (1979-83) and was twice a First Team All-Pro.  Fouts was the 1982 NEA MVP, PFWA MVP, and the Offensive Player of the Year, and that was his second straight year leading the NFL in Approximate Value.  It was especially impressive considering he had an AV of 22, in what was only a nine-game year due to the strike!  Fouts retired after the 1987 season and was considered one of the best QBs of his era.

While Philip Rivers passed many of Fouts' franchise passing records, Fouts was putting up numbers that few could at the time, and when he retired, only Fran Tarkenton had more Passing Yards than Fouts, who retired with 43,040.

Fouts was inducted into the Pro Football Hall of Fame in 1993, and his number 14 was retired by the Chargers.