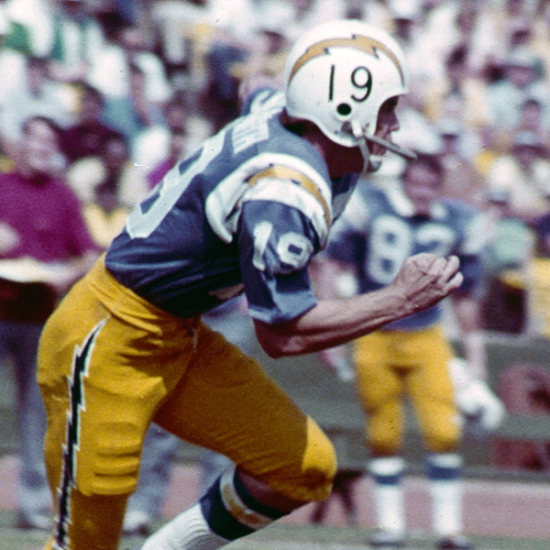 The San Francisco 49ers of the NFL and the Oakland Raiders of the AFL both drafted Lance Alworth, but it was the AFL where Alworth would join after his AFL rights were traded to the San Diego Chargers before his 1962 rookie season.  The Chargers gave up three players for Alworth, and it still turned out to be a robbery in favor of the Bolts.

Alworth only played four Games as a rookie due to injuries, but in 1963 he began a seven-year streak where he had at least 1,000 Receiving Yards and was a First Team All-Pro in the first six.  Alworth was the AFL's leader in Receiving Yards three times, was a three-time leader in Receiving Touchdowns, and was easily one of the most offensive skill players in the history of the AFL.  Alworth helped the Chargers win the 1963 AFL Title, and his yardage from the air was so prolific that he also was a two-time league-leader in Yards From Scrimmage.

Alworth was traded to Dallas Cowboys for three players before the 1971 season, and he played there for two final seasons before retiring, helping them win Super Bowl VI.  With the Chargers, Alworth had 9,584 Receiving Yards, 81 Touchdowns, and an astounding 111 in Approximate Value in the same amount of games.

Alworth was named to the 75thand 100thAnniversary Team and is a member of the All-AFL Team.  In 1978, he entered the Pro Football Hall of Fame. Alworth also has the honor of being one of four players who has his number retired by the team.