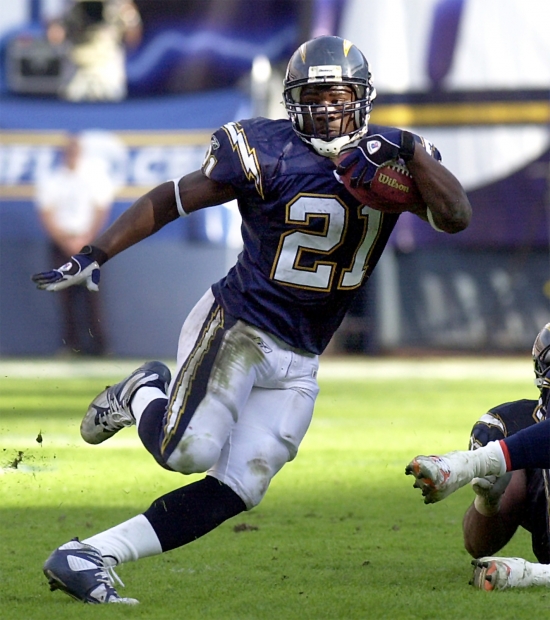 The Chargers grabbed Tomlinson Fifth Overall in 2001, and the All-Rookie Selection finished ninth in Rushing Yards (1,236). As good as that was, it began an ascent to the best Running Back in the NFL.  Tomlinson followed that with two straight years of 1,600 plus Rushing Yards, and in both of those years, he went over 2,100 in Yards from Scrimmage, finishing first in 2003 (2,370).  While Tomlinson's rushing numbers were lower in 2004 (1,335) and 2005 (1,462), but his Touchdown numbers increased to where he finished first with 17 Rushing Touchdowns in 2004 and had 18 in 2005.  Tomlinson was phenomenal in his first five years in the NFL, but in 2006, he was about to take his play to the next level.

Tomlinson led the NFL in Rushing Yards (1,815), and he set a new record with his league-leading 28 Rushing Touchdowns. For his efforts, Tomlinson was named the Bert Bell Award winner, the Offensive Player of the Year, and he was the league MVP.  Tomlinson was also as impressive off of the field as he won the Walter Payton Man of the Year.

In 2007, Tomlinson had lower numbers, but his 1,476 Rushing Yards and 15 Rushing Touchdowns again led the NFL.  His numbers would decline in the next two years, and he signed with the New York Jets, where he played two more years before retiring.

Tomlinson's 1,2490 Rushing Yards, 128 Rushing Touchdowns, and 16,645 Yards from Scrimmage are by far franchise records.  He was a member of the 2000s All-Decade Team, and his #21 was retired by the team in 2015, which coincided with election to the franchise Hall of Fame.  Two years later, Tomlinson was inducted into the Pro Football Hall of Fame.