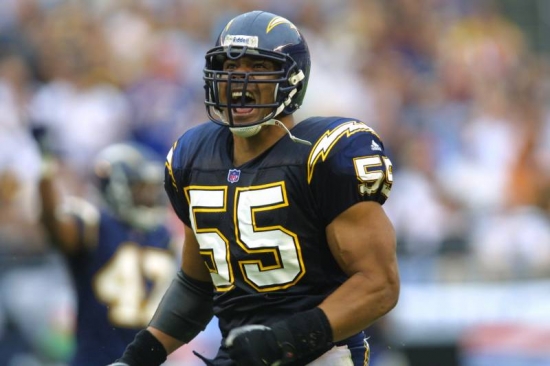 Junior Seau was a sensation in Southern California, but that happened before playing a down of pro football.  Seau was from Riverside, California, and he played his college ball at USC, so when he was drafted Fifth Overall by the San Diego Chargers, he was already beloved and right at home.

Seau became the face of the Chargers and was their best player for at least a decade.  "The Tasmanian Devil" went to his first Pro Bowl as an NFL sophomore (1991), and he repeated that honor each year until 2002.  In six of those years, he was a First Team All-Pro, and the Linebacker had the perfect blend of intensity and instinct, making him one of the most feared players in Pro Football.

Statistically, with the Chargers, Seau had 15 Interceptions, 47 Sacks, and 1,480 Tackles.

The Chargers traded Seau to the Miami Dolphins after the 2002 season, and he played seven more years in the NFL, three with Miami and four with the New England Patriots.

Seau would be named to the 1990s All-Decade Team, and he was inducted into the Pro Football Hall of Fame in 2015.  Sadly, it was posthumous, as Seau took his own life in 42, stemming from what was believed to be issues arising from CTE.  He received another posthumous accolade when he was named to the 100thAnniversary Team in 2020.

Seau is also a member of the Chargers Hall of Fame (2011), and his number 55 was retired by the team the year after.