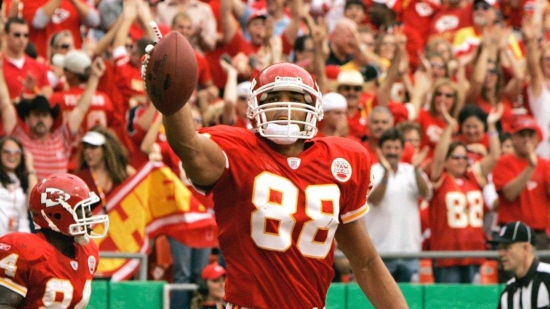 Not every NFL Tight End is used as a regular offensive weapon but Gonzalez certainly changed the way people thought of how to use the position.  In his third season in the league, Gonzalez would be named a First Team All-Pro, the first of what would be five selections as a Kansas City Chief.  Gonzalez would shatter the career record of receptions by a Tight End and would actually lead the NFL in that stat in 2004 when he caught 102 passes for a career-high 1,258 Yards.

Gonzalez would be traded to the Atlanta Falcons where he would play another five seasons, four of which would see him named to the Pro Bowl.  Entering the Pro Football Hall of Fame in 2019, Gonzalez was enshrined into the Chiefs Hall of Fame the year before.  In 2020, Gonzalez was chosen for the prestigious 100th Anniversary Team.