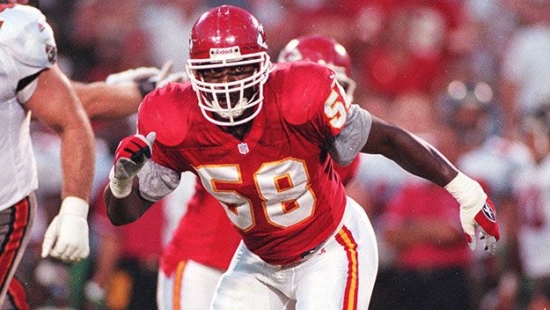 Derrick Thomas was the fourth overall Draft Pick out of The University of Alabama where he was the Butkus Award winner as the nation’s top Linebacker.  That defensive prowess translated to the pro game immediately as he would be named the Defensive Rookie of the Year in 1989 and was chosen for what would be his first of nine Pro Bowls.  In his second season, he solidified himself as an elite defensive player in the league by going to what would be his first of three straight First Team All Pros and he would also lead the NFL in Sacks that year.

Thomas was clearly a dominating player on the field and off of it, he was known for his philanthropic efforts.  He was named the NFL Man of the Year (later renamed the Walter Payton Man of the Year) in 1993 because of it and it is not inaccurate to say that not only was he a fan favorite but a community hero.

Thomas would be posthumously elected into the Pro Football Hall of Fame in 2009.  In 2001r, the Chiefs inducted him into their Hall of Fame and retired his no. 58 in 2009.