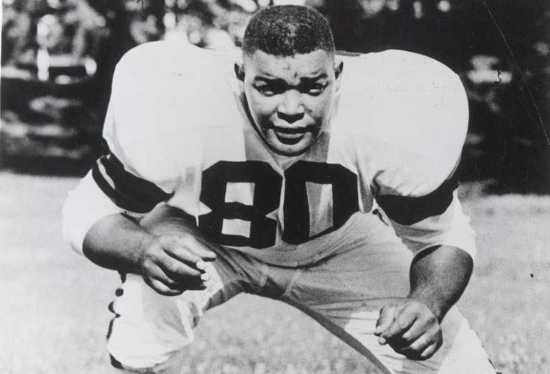 A National Champion at Michigan in 1947, Len Ford signed with the Los Angeles Dons of the AAFC, but the Dons were not one of the teams that would be absorbed into the NFL when the two leagues merged after the 1949 Season.  The Cleveland Browns took Ford in the Dispersal Draft, who was one of the teams that the NFL did take and who won all four AAFC Titles.

Ford, who was more of a two-way End in L.A., was predominantly used on defense in Cleveland, and he aided the Browns in their 1950 NFL Championship Team.  Ford become one of the best Defensive Ends in the game, and he was chosen for four straight First Team All-Pros and Pro Bowls (1951-54) and would later be named to the 1950's All-Decade Team.  He was also integral in Cleveland's 1954 and 1955 NFL Championships.

He played with the Browns until 1957 when he was traded to Green Bay, where he played one final year.

Ford was inducted into the Pro Football Hall of Fame in 1976 and was an inaugural member of the Browns Ring of Honor in 2010.