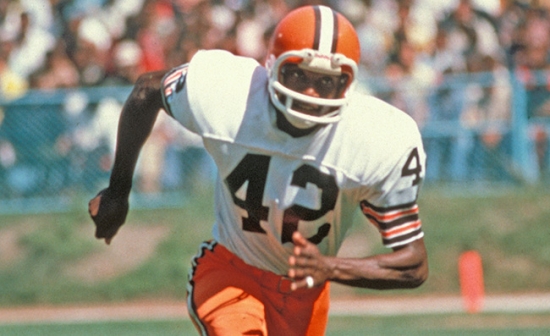 Paul Warfield was a National Champion at Ohio State in 1961, an All-American in 1963, and would stay in the state as a professional football player when the Cleveland Browns used the 11th Overall Pick to select the End.

Warfield joined an already potent Cleveland offense, led by Jim Brown.  He was immediately plugged into the scheme, accumulating 920 Yards as a rookie and helping Cleveland win the NFL Championship.  The Browns returned to the Title Game in 1965, though he missed nearly the entire season due to a broken collarbone.

He returned healthy in 1966 and was back to his old self, earning Pro Bowls in 1968 and 1969.  He would lead the NFL in Rushing Touchdowns in 1968 (12) and had ten the year after.  Warfield was an upper-tier Receiver, but the Browns inexplicably thought he was nearing the end, and they dealt him to Miami for only a Third Round pick in return.  Warfield got even better and would win two Super Bowls with the Dolphins.  After one year with the Miami Southmen of the World Football League, he returned to the Browns in 1976, playing two more years before retiring.

Warfield caught 271 passes for 5,210 Yards and 52 Touchdowns with Cleveland and was inducted into the Pro Football Hall of Fame in 1983.  He would later receive another prestigious accolade when he was named to the NFL 100thAnniversary Team.  Warfield was also inducted to the Browns Ring of Honor as part of the first group in 2010.