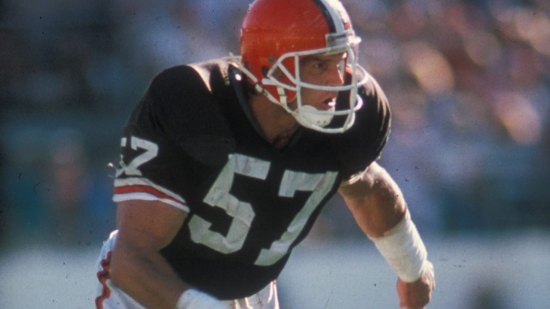 From USC, Clay Matthews Jr. was the son of a four-year NFL vet, Clay Matthews Sr., and the brother of Bruce Matthews, who would enter the Pro Football Hall of Fame.  Clay Jr. did not make it to Canton, but many in Cleveland feel that he should have.

Matthews Jr. was taken in the First Round in 1978, and in his sophomore year, he was a starter at Outside Linebacker.  Leading the NFL in Tackles four times, the former Trojan was also a four-time Pro Bowler and had eight seasons where he cracked the 100-Tackle mark.  An expert run-stuffer, Matthews Jr. was a durable figure who played for Cleveland from 1978 to 1993, playing in 232 Games.

He left Cleveland for Atlanta, where he played three more seasons before retiring at age 40.  As a Brown, Matthews Jr. would have 62.0 Sacks and 1,420 Tackles, and in 2019, he was inducted into the Browns' Ring of Honor.