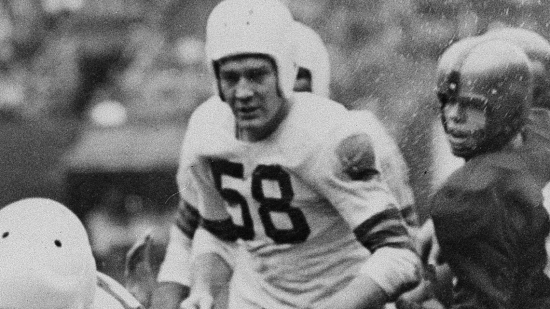 Mac Speedie played collegiately at Utah and was a late-round pick (15th) in the NFL Draft.  He did not enter the NFL, opting instead to go to the military to serve the United States in World War II, and when he returned, he tried out, and made the Cleveland Browns of the upstart All-American Football Conference.

Browns' Head Coach, Paul Brown, used Speedie in his offense at End, where he would become one of the top receivers in the AAFC.  Speedie and the Browns won all four titles in the AAFC’s existence, and Speedie was the league leader in Receiving Yards twice.

The Browns migrated to the NFL in 1950, and he was named to the Pro Bowl twice, though he was unable to reach the four-digit mark in Receiving Yards as he did in the AAFC.  He did, however, help Cleveland win the NFL Championship in 1950, which was his fifth in a row.

His run in the NFL could have been longer, but a dispute with Brown resulted in Speedie taking his talents to Canada, where he played three years before retiring.  Speedie had 5,602 Yards with 33 Touchdowns with Cleveland.

Speedie was elected to the Pro Football Hall of Fame as part of the Centennial Class.  That year, Speedie entered  Browns' Ring of Honor.