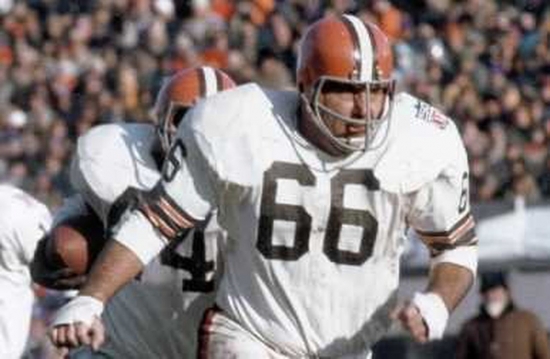 From Ole Miss, Gene Hickerson was chosen in the Seventh Round in the 1957 Draft, where Cleveland Browns Head Coach, Paul Brown, liked his speed and moved him to the Right Tackle position, where he became their starter in his second season.  As Hickerson improved, his 1961 Season was taken from him due to a broken leg, but he returned the following season as a greater asset that protected Jim Brown and company.

Hickerson helped Cleveland win the 1964 NFL Championship, and as he turned 30, he defied time and grew into one of the top Guards in football.  From 1965 to 1970, Hickerson put forth an Approximate Value of at least 11, peaking with 18 in 1968.  In all of those six years, Hickerson went to the Pro Bowl and was a First Team All-Pro from 1967 to 1969.  Hickerson played until the end of the 1973 Season, and he retired with the team he started with, finishing with 202 Games Played.

Hickerson received the Pro Football Hall of Fame call in 2007.  Three years later, he was part of the first Browns Ring of Honor class.  Notably, Hickerson was also named to the 1960s All-Decade Team.