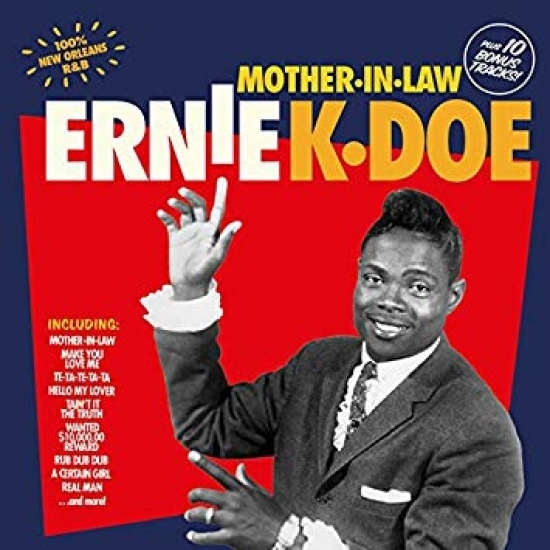 I think I have been lucky in regards to evil “Mother-in-Laws”.  I never had any issue with my first one, and with my second one (and hopefully last), she is very shy, doesn’t talk much and speaks very little English, lives on the other side of the world, so any insulting things she may ever say about me the one time I see her per year, I can’t understand anyway.[1]  My wife has it even easier I think as my mother loved my wife immediately, and I suspect that if something ever happened to my marriage that my parents would keep her and forsake me as their son.[2]

While I have been fortunate in that regard, I have known some people who have cursed out their mother-in-law’s antics while tossing back beer, and as the next song was a number one hit in 1961, I can only surmise that who you marry into is every generation’s plague.

“Mother-in-Law” would be the only number one hit of Ernie K-Doe (born Ernie Kador) and with that stage name I have to wonder if to the uninitiated that they think he was a late 80’s rapper?[3]  It wasn’t obviously, and we have here a man from New Orleans who was a vital part of the Louisiana R&B scene, but it was by collaborating with an even bigger legend from the Crescent City, Allen Toussaint that put him forever on the map.

Toussaint would become one of the most revered musicians who was adept at composing, arranging, songwriting and producing and already in his early twenties he was the most important piece of Minit Records and was working with K-Doe to come up with a hit, which is exactly what happened with “Mother-in-Law”, a song he wrote, though it almost never made it out of the studio.

As the story (or legend would have it), Toussaint (who played the piano on the song) got frustrated with the failed takes from K-Doe and took the paper in which the composition was written on and crumpled it up and it took a backup singer to smooth the situation over.  Cooler heads prevailed and the song was released to a huge audience that crossed over regardless of ethnicity, as the pain in the ass “Mother-in-Law” knows no racial boundary.

Half novelty/half R&B but all fun, the delivery of the “Mother-in-Law” being described as “Satan” and “the worst person he knew” was so tongue in cheek that nobody could take it literally, especially from a showman like Ernie K-Doe who never saw a stage that that he wouldn’t ham it up on.  He would develop catch phrase after catch phrase and the older he got, the more eccentric he seemed to become, but no matter how strange he got, the city of New Orleans never stopped loving him.

[1] I have always imagined subtitles under her when she is talking to me that said; “I can’t believe my daughter married you.”

[2] That wasn’t the case with my first wife…and boy were they right about that one!

[3] I am convinced that I could at least convince nine out of ten people that it was Ernie K-Doe who rapped “Wild Wild West” and not Kool Moe Dee.