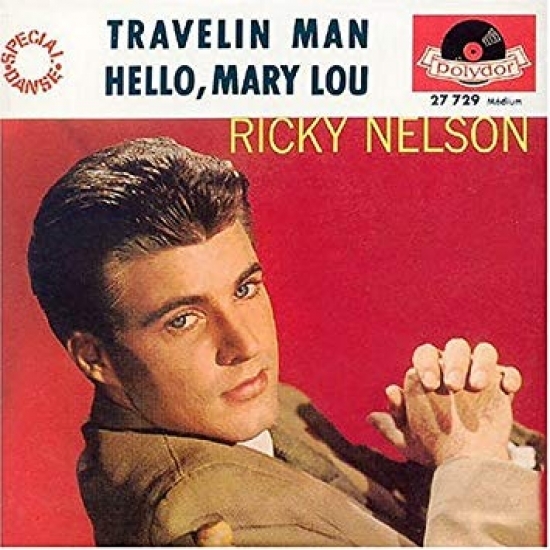 The first thing you may notice (or at least I did) is that the letter “y” left Nelson’s name.  The change “officially” took place on his 21st birthday, and considering he grew up on television, and the world knew him as “Ricky”, it wasn’t a change that America took to immediately nor the record company as his singles was still printed with “Ricky”.[1]

Whether he called himself Ricky, Richard or Dick, Rick Nelson had earned the right to call himself whatever he wanted and in the timeframe between his first number one, “Poor Little Fool” and “Travellin’ Man” he made the Top Ten six times, was still the star on a very successful television show and was a top concert draw.  More importantly, with the explosion of teen idols, especially those who were untalented, the respect level that the critics showed him and the more sophisticated music listener was constantly growing.

As big a star as he had become, his soft almost droning singing style prevented him from being in your face, so if he was an artist you didn’t care for, it never bothered the radio listener when he was on.  Artists like that can be immune from backlash, and there was no real anti Rick Nelson movement afoot that he ever had to worry about, and based on Billboard, he was only third behind Elvis and Pat Boone in overall chart success from 1958 to 1961.

With “Travellin’ Man”, Nelson sung about the various girls he met all over the world:

A Pretty Senorita from Old Mexico

A Fraulein from Berlin

A China Doll from Hong Kong

Damn Ozzie’s boy sure gets around doesn’t he?[2]

I think what is amazing is how Nelson can croon about the “international loving” that he gets without sounding like suave James Bond or even a disgusting pervert.  That is probably why to this day when people talk about Nelson, they still refer to him as “Ricky” instead of “Rick”, and let’s face it: nobody named Ricky can have malicious intent.  Hell, when Ricky “Wild Thing” Vaughn slept with his teammate’s wife we forgave him because we totally believed him when he said “I didn’t know who she was” you felt he was genuine.  I don’t know if we would have if it was Rick “Wild Thing” Vaughn.[3]

As for Rick Nelson, this would be his final number one, but not his final hit and there is still some life in this book to tell more of his story.[4]  Sadly, this will also involve his no talent kids…and no I am not talking about Traci Nelson, who will forever be Jennifer DeNuccio from Square Pegs to me.

We thought we would do this a little differently since you can see that the song came back to the top (out them both on one article).  However considering this is the last time Ricky Nelson went to the top (even if it is a song that already went there) a final look at this legendary singer is worth a look don’t you think?

Nelson had a lot left in the tank, as even “Travellin’ Man’s” B-Side, “Hello, Marry Lou” was a Top Ten hit and had another four reach that threshold in the early 1960’s.  Nelson’s popularity, like the vast majority of all pre-British Invasion acts failed to stay as a top star post 1964.  This rendered Nelson, who wasn’t even thirty to a premature oldies circuit, though that held a lot of logic in the late 60’s as the music of that time was night and day from what it was ten to fifteen years previously, which certainly is the case today as the modern day oldies run is held at casinos and frequented by a much older demographic.

It was actually at one of those legend concerts that Nelson would find inspiration for his last major hit in 1972, “Garden Party”, a song about where he got booed at Madison Square Garden at an oldies concert as he looked and dressed like 1972 (as opposed to 1962) and played some of his newer material.

That was Nelson’s last hurrah on the charts, but with it he cemented himself as a musical star for the ages and arguably would be his greatest song ever.  He would die prematurely in 1985 from a plane crash and two years later he would posthumously enter the Rock and Roll Hall of Fame.

[1] I actually remember Ricky Schroeder making that name change to a snickering reaction.  Not coincidentally, I resemble a slightly pudgier version of Schroeder.  So much for Brad Pitt playing me in the movie about my life.

[2] Thankfully Gene Simmons never thought of doing the same type of song, but he probably had trouble finding words that rhymed with “skank”

[3] For what it is worth (and for me a lot), Vaughn was elected to the first full class of the Fictitious Athlete Hall of Fame.

[4] I have spent my entire life called Curt, even though my name is KIRK.  Four letters and one syllable shouldn’t be that hard!   If Nelson wanted from this point on to be Rick and not Ricky; that is what he will be called by me.