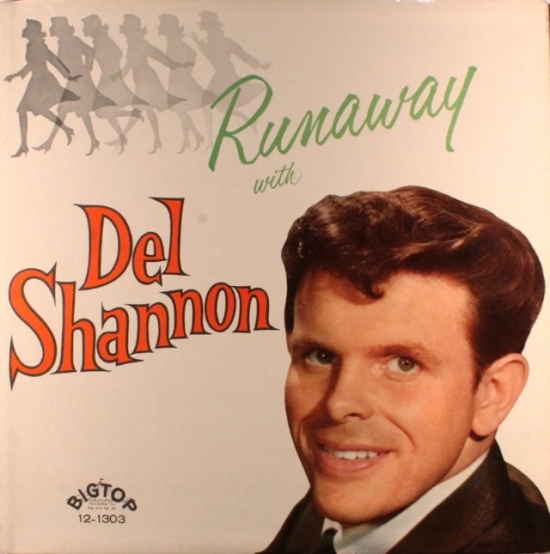 I have used a lot of words describing how the early 1960’s were getting safe musically but that brush didn’t apply to everyone and occasionally in that time period an act would break through to the mainstream that was worthy of adding to the rock and roll canon.  Del Shannon was definitely one of those artists.

Born Charles Westover in Grand Rapids, Michigan, Del Shannon’s fortune changed when the band he was in (The Big Little Show Band) added keyboardist, Max Crook, who played an early version of the synthesizer, one he actually invented.  The duo would collaborate on a song “Little Runaway” that would feature Crook’s unique keyboard sound and Shannon’s darker side of love.

The song’s title would be shortened to “Runaway” and following an appearance on American Bandstand the song was an instant hit.[1]  It sounded so much different than anything else that was on the radio and in retrospect foreshadowed some of the more haunting music to come later in the decade.  Shannon, who could slip into a falsetto at will, had a voice that masqueraded him to many as a pop star, but musically he was a brooding rock and roller, and one hell of a good one at that.

While Shannon’s career would fade by the mid-60’s, “Runaway” would remain an iconic song and it would be revived somewhat when used as the opener for NBC’s underappreciated show, Crime Story, in the late 80’s.  Shannon however had long struggled with depression (perhaps why his lyrics were cryptically dark) and he would commit suicide in 1990 at the age of 55.

Had Shannon joined the Travelling Wilburys as had been speculated following Roy Orbison’s death, would he have enjoyed a career renaissance?  Would that have kept him alive?   We’ll never know, but he was honored in 1999 as a Rock and Roll Hall of Fame inductee and “Runaway” could very well be the best rock song from 1961, and maybe the early 60’s period.

As for myself, my memories of this song will always be linked to my dad’s attempt at the high-pitched “Why why why why why” attempt.

While he failed it at it, he still remains my hero to this day.  I mean my dad, not Del Shannon.

[1] Have I mentioned how powerful American Bandstand and Dick Clark were back then?  It is worth mentioning again.