Will You Still Love me Tomorrow 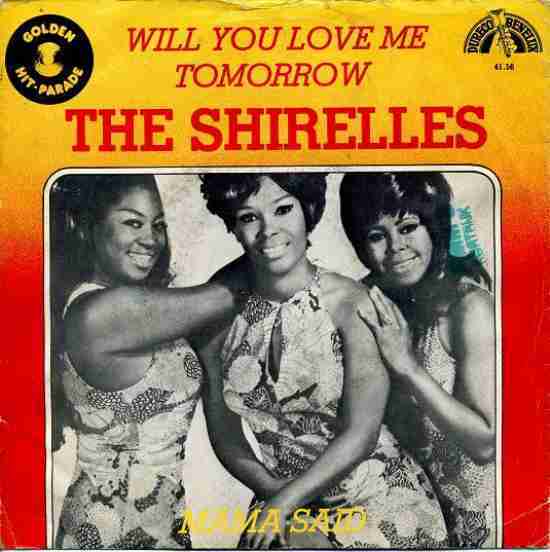 Will You Love Me Tomorrow

The idea of an all girl group was not new, but it had never been proven in the rock and roll era that one could be successful.  When the Shirelles went to number one with “Will You Love Me Tomorrow”, it proved that it could be done.

From Passaic, New Jersey, the Shirelles would win a talent show in high school and gain the attention of Decca Records, who released a few of their songs (though to no success) but it was not until they were signed by the smaller Scepter Records and were tasked to songwriter/producer, Luther Dixon.  Dixon didn’t see them as four black girls from Passaic, but as four girls who could who had talent with crossover appeal.  With lush string arrangements, sweet harmonies and mature songwriting a blueprint for all girl groups was created and was copied throughout the 1960’s.

The lead singer, Shirley Owens (you can tell it was her name from which the group name derived from) had the voice that was the key to Dixon’s equation.  The Shirelles had an innocent quality to their vocals that allowed them to tackle more adult subject matter without the casual listener really picking up on the innuendo.  The arrangements certainly helped, as the more adult choice of instruments was a nice contrast to Owens and the rest of the Shirelles’ singing.

After a few minor hits, the group released a song written by the songwriting team of Gerry Goffin and Carole King, which would be the first of many hit songs that they would be associated with.  “Will You Love Me Tomorrow” took up where Brenda Lee and Connie Francis left off and the female voice was getting louder.  Now there had been hit songs from the male point of view that alluding to couples having sex, but never before had there ever been a woman singing about it.

The name of the song implied (though again never stated) that if they had sex that evening, would he still be interested in her the next day.  In 1961, men were supposed to want to have sex, and women were supposed to push them away…at least on the surface anyway.  We know that certainly wasn’t always the case and the amount of abrupt marriages taking place with a baby (and of course always “premature”) arriving seven months later in the late 50’s and early 60’s was not just one or two.  The song doesn’t seem that progressive now, or even by the time the mid-60’s rolled around, but for ’61 this was very adult and very much ahead of its time.

While many didn’t pick up on the message, there were a few stations that refused to play the song, but for the most part there was little fuss raised and it would become one of the most enduring songs of the era.  “Will You Love Me Tomorrow” unquestionable be their biggest and most important hit, but it would not be their last, nor would it be the final time that an all girl group in the model of the Shirelles would reach the top.

Actually, this is the 60’s!  We are going to see a lot more like this!

More in this category: « Wonderland by Night Calcutta »