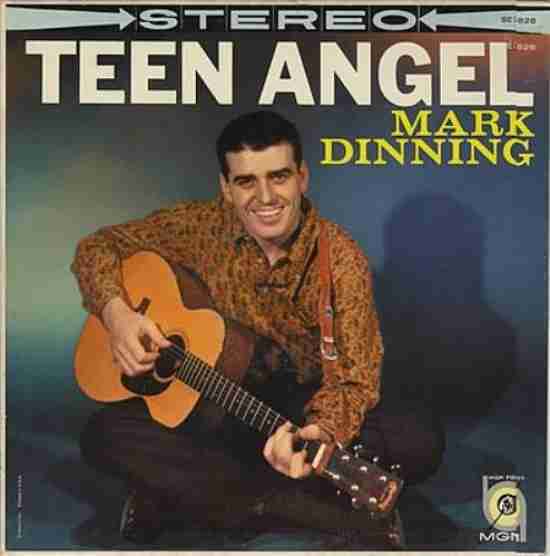 
Yes, we went three for three.

Following the death of a gunfighter and two young natives, we have the morbid tale of a young teenage girl who died on the railroad tracks fetching her boyfriend’s class ring in their stalled car.

“Teen Angel” was Mark Dinning’s first and for all intents and purposes his only real hit and it was written by his older sister Jean, who was in her own group with her other siblings, the Dinning Sisters, who had four Top 20 hits in the 1940’s.[1]  Now although, this is the third consecutive song that involves someone going six feet under, this song had a much harder road to the top than the other two songs.

It wasn’t because Dinning was not an established star, as neither was Preston, or did not have some backing.  His sisters’ past success in the record industry was still enough to give Mark enough of a head up to get a look and he was already under a contract for a couple of years so he did have a bit of pedigree to take a chance on banking.  No, what made the song’s trip up the charts a lot more difficult was the person who dies in the song, namely a presumably white teenage sixteen-year old girl.

Since Robbins’ protagonist was a cowboy in the old west, death by gunfire is an expected part of the profession.  When Preston’s young couple passed away, they were Native Americans and in 1960, that would make the 6:00 girl, but as black comedians have been saying for years, if the victim is a white teenage girl, the entire police force and every news station would be present.  Radio stations were hesitant to play what they felt was too morbid a song, and there were several cases where it was banned, but once they started to play it, it did catch on.

Was it because the youth of America and the U.K. (it went number one there too after going through the same issues) wanted to hear morbid songs?  Likely not, as once a kid hears that something is banned it is far more interesting, but that is probably only a part of it.  Teens are the princes and princesses of angst and tragic love tales when you are that age probably doesn’t sound that far fetched.

Another theory is that like so many songs, people only hear the hook or the chorus, so with “Teen Angel”, all they remember is the line, “Teen Angel, Can You Hear Me?” and possibly thought is was a simple love song.  One of the best examples of not listening to an entire song is Bruce Springsteen’s “Born In The U.S.A.”, where millions of Americans thought it was a simple patriotic song, when it was about the hardship of a Vietnam veterans cast out by their country.  Ronald Reagan even used in his 1984 Presidential campaign where he even talked about a young man (Springsteen) who was proud to be “Born in the U.S.A.”.

Regardless of what propelled the song to the top it was really Dinning’s only hurrah and he would slowly disappear from the spotlight.  He would die in 1986 at the age of 52 to little fanfare.

Incidentally, there was never a song written whether Dining could hear anyone in the afterlife.

More in this category: « Running Bear Theme From a Summer Place »