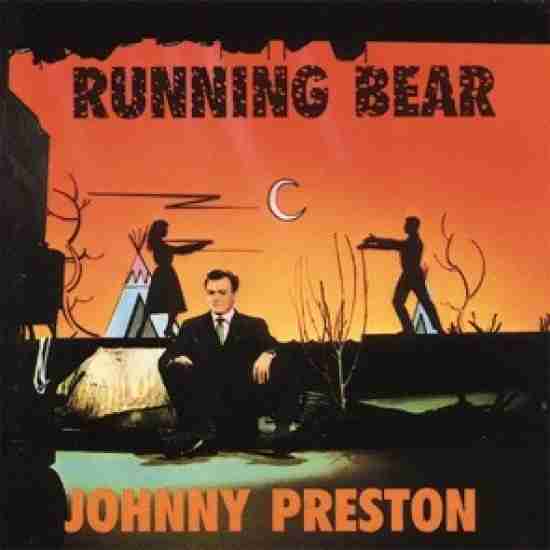 
Part Cajun, part German, but all Texan, is the make up of a man whose lone number one hit was about tragic Native American love.

While in college in Beaumont, Texas, Johnny Preston formed his first band, “The Shades”, and while playing a gig he gained the attention of J.P. Richardson, who professionally was known as the Big Bopper, who that summer had his biggest hit, Chantilly Lace all over the radio.  Something about the young Preston, caught the Bopper’s eye and he invited him to record a song he wrote called “Running Bear”, which while meant to be tragic in tone (the young lovers died in the river), came off a bit campy, and as years go by it is even more so.

Indian war drums play in the background as does a war chant, which was droned by the Big Bopper and country music legend, George Jones, and the song was released shortly after the Big Bopper died in the infamous plane crash that also killed Buddy Holly and Ritchie Valens.  The love story of Running Bear and Little White Dove took on a Romeo and Juliet tone as they died in each other’s arms in the raging river was a surprise hit and easily the high water mark of John Preston’s career.

Now maybe it is white guilt but there is something about hearing a white guy trying to appropriate his version of native culture into a song that just seems wrong to me.  The characters described in the song are more like caricatures, and come off as hollow stereotypes though by 1960 standards, most of white America probably didn’t think so.  It is a song that couldn’t be made today (not by someone who looks like Preston anyway) and is rarely heard today, even on oldies stations.

I checked comments on YouTube on this song where some comments came out and said it was blatantly racist, while most were happy to hear it again and reminisced.  I don’t think there were any racist intentions at all, but I do think it is a case of an era where the idea of Native American sensitivity didn’t exist.

Actually, we really haven’t progressed that much…

As for Preston, he would go on to have another Top 10 hit in 1960, “Cradle of Love”, which also had a novelty type feel to it (though it did have a nice rockabilly beat working for it), and by the end of the year following that would be all for him and the charts.  Personally, I kind of enjoyed his other hit, “Big Bad John”, though it feels more like a heavy-duty paper towel commercial nowadays.

He would enter the Rockabilly Hall of Fame and would pass away in 2011 of congestive heart failure.

We have just had two songs in a row where someone died in the song.  Let’s go for three shall we?

More in this category: « Heartaches by the Numbers Teen Angel »