Theme From a Summer Place 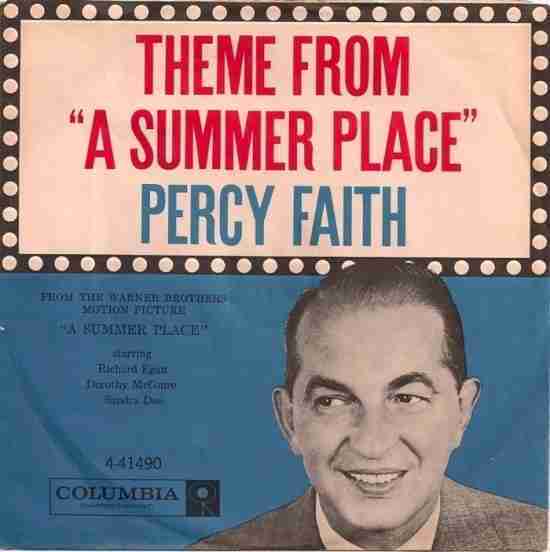 
Unlike our last three songs that went number one, we have is an instrumental, so at least we know nobody dies.

I will go out on a limb and say that I am probably not the only person who first became aware from “A Theme From A Summer Place” from its use in National Lampoon’s Animal House and not from the film, Summer Place.

I have never seen the film, A Summer Place (I can’t say I intend to), but although its “theme” is not really in my musical wheelhouse, I couldn’t help but then, like I am now to be transfixed by the instrumental by Percy Faith and his Orchestra.[1]  Without words, Faith’s lush arrangement tells a story of love, beauty and reminiscing and though it does not have an overpowering note, it has in time “overpowered” the film, as it has been one of those rare cases where three minutes of music is exponentially more remembered than ninety minutes of movie.  The song was such a smash that it would be Billboard’s number one song of 1960, the first and to date only song from a movie to win the Record of the Year Grammy, and also is the longest topping instrumental on the Hot 100.

Most of that I already knew before, but as much as I pride my self on my knowledge of 40’s and early 50’s Jazz and Blues, I have to acquiesce that I know so little about the mainstream of that era that I was oblivious to the fact that Faith had reached the top of the chart in 1952 (Delicado) and in 1953 (The Song From Moulin Rouge), the latter of which was also a number one song of the year according to Billboard.  This makes Faith one of three acts (the others being the Beatles and Elvis Presley) to have reached the top in two different decades and the only musician ever to have done so in both the pre-rock and rock era, a feat that is impossible to duplicate.

It has also been stated that Percy Faith is the originator of the genre of “Easy Listening”, and while I am not certain that is true, there is something about listening to his music, especially “A Theme From Summer Place” that is soothing, and one of those songs that you could listen to in the dentist chair and does calm you.

You know what, let’s just call Faith the “Godfather of Calm”, because with the amount of research that I have done thus far, investigating the history of elevator music is not high on my to do list.

While Faith generally had success arranging pop standards he would later try his hands at doing the same with rock & roll acts in the 1960’s. While it wasn’t bad, it couldn’t help but feel watered down, and though Percy was not exactly considered an innovator in his day, he had without question become a follower.  Faith would die in 1976 and was recording to the end, the last of which would be Summer Place ’76, a disco remake of his most enduring hit.

Oh…one more thing.  He is also a Canadian.  How did I miss that?


[1] Technically, it wasn’t the theme from the movie as it was initially a love theme for the two main characters played by Troy Donahue and Sandra Dee.
Last modified on Monday, 05 June 2017 13:06
Tagged under
Tweet

More in this category: « Teen Angel Stuck on You »

0 #1 Richard Barnett Bloom 2017-06-18 01:22
I turned six that April of 1960 and have written about "Theme from a Summer Place" elsewhere. For those of us of a certain age, the appeal of the song is intermixed with the remembered joys of being young and feeling little else but joy and gratitude toward our parents, sibs, grandparents , et al. It was such an innocent age that Faith perfectly, I think uniquely, captured in this Theme, an age that we all remember would soon change irrevocably for the nation as we grew from little boomers into self-aware teens. The song's composer also deserves credit, for the melody is haunting and ineffably lovely as so few others are. Imagine being six that spring and watching on the new TV a presidential campaign between two men the same age as your father, both with children your age. We found it impossible not to think the world revolved around us. That's why we've been so difficult to please. But most of us look back fondly and a bit wistfully at the spring of 1960 and "A Summer Place".
Quote
Refresh comments list
RSS feed for comments to this post