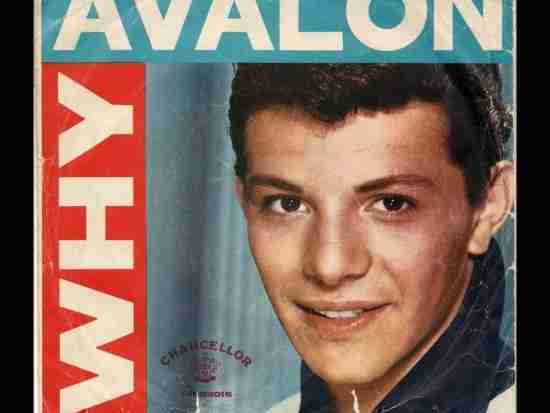 With a song written by his producer, “The Idolmaker” Bob Marucci, “Why” was a ballad that while it did go to the top, has come off like another throwaway late 50’s/early 60’s ballad teen idol ballad that has been forgotten fairly quickly unlike “Venus”, his most enduring hit.  Musically, Avalon would never approach that level of musical success again.   He would have more songs in the Top 40, but none of them cracked the Top 20.  However fear not, for Avalon as his second career was about to begin.

Like other musicians, Frankie Avalon took a stab at the movies, even landing dramatic parts such as a part in “The Alamo”, starring John Wayne[1] and in the 1961 science fiction film, “Voyage to the Bottom of the Sea”, but it was his pairing with Annette Funicello, a former Mouseketeer and owner of a few Top 40 hits herself that would define him more than “Venus” did.

Avalon and Funicello would star in the mid-60’s “Beach Party” movies, where the wholesome teenagers would frolic on the beach in plots that were generally nonsensical but unequivocally fun.  The films were not exactly classics, but they were moneymakers, harmless and featured some pretty sweet cameos from modern musicians such as Stevie Wonder, The Supremes, The Animals and The Beach Boys and a few songs by Frankie and Annette, a lot of flirtation with absolutely no hint of penetration and a happy resolution at the end.[2]

Despite what he accomplished in the 1950’s and 1960’s, there were a litany of teenagers in the 1970’s who only knew Avalon as the Teen Angel in Grease for singing “Beauty School Dropout”, though for me I remember him best in one of my 80’s guilty pleasures, “Back to the Beach”, where he reunited with Funicello in a pseudo-parody of the Beach Party films they made famous.

Actually, I have no idea why that was a guilty pleasure of mine in the 80’s, considering I never sat through a Frankie and Annette beach movie.

With that my friends, let’s leave the 1950’s behind and move on to the next decade.

Should be interesting, don’t you think?

[1] If I was John Wayne, do I want Frankie Avalon as my backup?  I think I would go AWOL.
[2] Notice I said Happy Resolution and not Happy Ending.  Perverts, you know what I mean!
Tagged under
Tweet

More in this category: « Mack the Knife El Paso »