The Battle of New Orleans 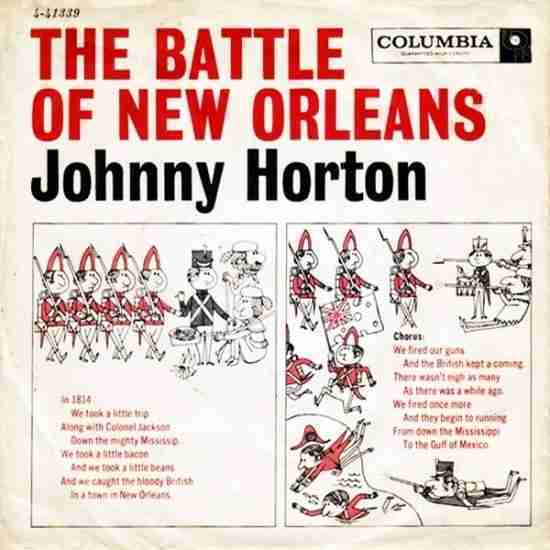 
This is a chapter dedicated to my dad.

I told you already how Johnny Horton’s Greatest Hits was one of the frequently played 8-tracks in my dad’s 77’ Grand Prix, and how his songs are burned forever in my memory.  With the exception of my brother, I have never met anyone in my age group who is familiar with Horton, or even peripherally aware of his music, and the rare times I have ever played it when it randomly came up on my I-Pod I would get a funny stare, usually followed by “What the hell is that crap?”

I get it.  Horton’s music doesn’t particularly age well, even by Country standards and it is not like there has been a demand for historical quasi-Country/Folk songs in years, but for this was a niche that Horton mastered, and arguably did better than anyone.

“The Battle of New Orleans” is a soldier’s account of the aforementioned battle from the War of 1812, a war that depending on whom you ask was won by the Americans, the British or a tie.[1]  Despite the content, it is comical in nature, has a Rockabilly twang and for a war song, it was a lot of fun to listen to and it would be the number one song according to Billboard for the entire year1959.  Horton would go number one on both the Hot 100 and the Country & Western Chart, and would reach the top ten twice more on the Hot 100 with “Sink the Bismarck” and “North to Alaska” and possibly could have had a few more had tragedy not ensued in November of 1960 when he was killed in a car accident while driving home from to Nashville from Shreveport, Louisiana.

With Horton’s death, historical songs died for a while on the charts too.  Horton was a straight up Honky Tonk singer before he was labeled as an amateur historian, and though he probably would not have not have reached the top of the Hot 100 again, like so many other Country stars who make it on the mainstream chart, he probably would have been on the Country chart for at least another decade.  I have to hand it to that genre; they never forget their stars.

As for me Johnny Horton will live on forever when I think of my dad and on that 8-Track, later a cassette I would later buy, than a CD and finally an illegal download.

…and yes, these will always be fond memories.

7/6/59: Long Black Veil by Lefty Frizzell did not chart but did reached #6 on the Country & Western Chart.

[1] Sadly as a Canadian I hear all the time how we beat the Americans in that war.  I say sadly because we were 50 years from being a country so how could we have beaten anybody?
Last modified on Sunday, 06 November 2016 18:56
Tagged under
Tweet