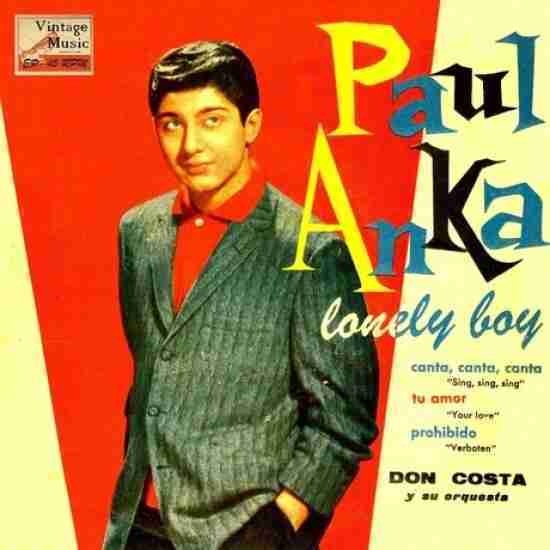 Finally this Canadian boy (middle-aged man) gets to talk about one of his own, and it is a damned good success story at that.

From the 1950’s until today, one constant is the teen idol.  I have already talked about a few, some of who were super talented while others just were pretty faces without even a shred of singing ability.  Good looks can get you noticed but can also keep you from getting the respect you deserve.  Paul Anka is very respected these days, but in the late 1950’s, despite all of his success there were many that saw him as just another pretty face.

Already breaking the mold by being a Canadian, Anka was of Lebanese and Syrian descent but since he didn’t have an overly Middle Eastern look, nor was his last name anything that anyone automatically associated with that part of the word, he didn’t have to whitewash his look or his name.  Still, the market of his native Ottawa and for that matter, Canada is only so big and if you really wanted to make it in 1959, you had to do that in the United States…in some ways that really hasn’t changed.

At the age of seventeen, Anka went on a trip to New York City with a group of friends and landed an audition with Don Costa, a producer with ABC.  Anka sang “Diana”, which would not only land him a contract, but would become a number one song on the Best Sellers in Stores Chart.[1]  Other hits would follow, and with “Lonely Boy”, he would make his first appearance at number one at the Top 100.

That song was done perfectly from the teen idol playbook, where said youngster is either in love or pining for love (in this case pining), and it was again written by Anka who cornered the market on short, dark and handsome.

He would go on to have a monster 1959, with more enduring songs like “Puppy Love” and “Put Your Head On My Shoulders” and in the 1960’s, while in his twenties he shifted gears by becoming an musician dispensing adult contemporary material, which was probably a better fit for his songwriting ability, an attribute that most of his own fans may not even be aware he has.  In addition to his own hits, Anka wrote Buddy Holly’s “It Doesn’t Matter Anymore”, Tom Jones’ “She’s A Lady” and Frank Sinatra’s “My Way” a song so perfect for the Chairman that this alone would have been good enough to earn a place in the Songwriter’s Hall of Fame.[2]

Anka would go number one once more much later in his career, however don’t expect me to be nearly as kind when we get to that song.  I think when you see what it is, you will probably agree, as that tune is horrifically bad.

7/13/59: Back in the U.S.A. by Chuck Berry hit #37 and reached #17 on the R&B Chart.
[1] “Diana” was apparently written about his former babysitter.  She must have been quite good looking, as the babysitters I had certainly did not inspire me to write a song about it.
[2] Anka was inducted into that Hall in 1993.
Tagged under
Tweet

More in this category: « The Battle of New Orleans A Big Hunk O' Love »