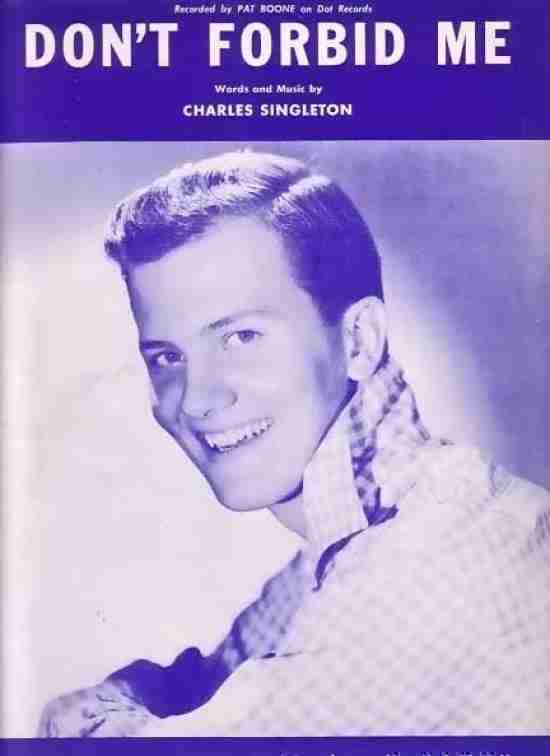 
Pat Boone is back, though this is arguably his least memorable number one song, and it is also the first time we are looking at any song in the modern Rock era that lasted at the top for only one week.

To nobody’s surprise, we have another Boone song that was written by a black songwriter, though this had not been a hit by the writer in any capacity. “Don’t Forbid Me”, was written by Charles Singleton, who penned the Frank Sinatra classic, “Strangers in the Night”, a song so good he could have done that alone, called it a career and nobody would have said he fell short. He would also write “Spanish Eyes’”, which would later be a hit for Elvis Presley.

With “Don’t Forbid Me”, Boone again may have taken the soul out of the tune but since very few people heard any other version of it, it was immune from the usual criticism. Boone did what he did best as he brought his usual safe romanticism, which was his calling card and which usually resulted in significant sales. It may have been formulaic, but it worked for him, worked for the 1950’s, and he had his own show to present it to a larger audience.

Since Boone will be discussed a little more later (and yes, we are going to touch on his album of Heavy Metal covers) for me it is worth noting that this is one of the songs that was later recorded by a foursome dubbed as the Million Dollar Quartet, though they never called themselves at the time, nor was it even released to the general public back then. Actually, the whole thing happened by accident, but it gives me a chance to talk about some other legends, three of which never made the top spot on the pop chart.

I spoke of two of them during the introduction, Carl Perkins, who hit as high as number two earlier in the year with “Blue Suede Shoes” and Jerry Lee Lewis, who was six months away from when “Great Balls of Fire” rose to number two, and cementing himself as a bona fide rock star.[1]

The third is Johnny Cash, another who had multiple number one hits on the country charts, did have significant crossover success, but also did not hit number one on the pop charts, though he did come close, when a live version of “A Boy Named Sue” went number two in 1969.

“The Man in Black”, who is more revered than ever, is one of those men you don’t expect to have a number one on the Pop Charts, but you also suspect he never cared. That is why he resonates so well with each generation; Cash has a rebellious spirit that never went away, and lyrically he delivered more angst than half of Seattle.

You know what? You got me, this was a weak tangent but it was a way that I could crowbar talking about those three legends, but think about all of the great music and meeting of the minds that was taking place during the Rock and Roll era this was an impromptu deviation I had to take!

The Million Dollar Quartet (the fourth member was Elvis Presley, who had more than enough hits for all of them put together) as it would come to have been known, was not exactly an accident, but it wasn’t exactly planned either. The session, which took place at Sun Records originated when Jerry Lee Lewis, the latest signee to the label was called in to do session work for Perkins. Lewis was a coveted grab for Sun, as word had gotten out about the way he played the piano in the new Rock and Roll/Rockabilly fashion in ways nobody had heard before. Jerry Lee didn’t tickle the ivories; he made them scream and holler.[2]

Johnny Cash stopped in on the session to watch, and Elvis stopped by for a visit and thus the four jammed together in a session that what was thankfully recorded, though the recording would not see the light of day until over a decade later, which revealed the song we are talking about here and a lot of gospel inspired music, much of which was where the roots of Rock came from.

Now if there was a great Pat Boone jam session let me know, but if anything it reminds us that regardless of whatever may be at the top, middle or bottom of the chart, may not be the place where musical magic is taking place. Far too often, we never hear it at all.

More in this category: « Singing the Blues Young Love »