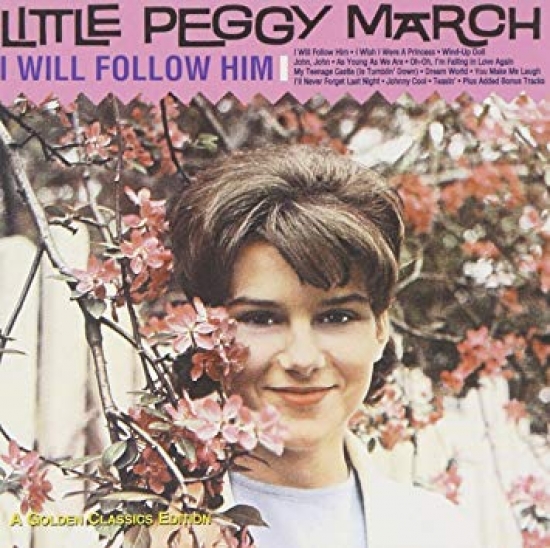 Following Little Eva, we have Little Peggy March who at four foot nine and fifteen years old was certainly “little”.

Born Margaret Battavio, the woman (or girl I suppose speaking in ’63 terms) known as Peggy March was signed at the age of fourteen by RCA, allegedly after being discovered by singing at a wedding.[1]  Her first crack at musical stardom, “Little Me”, a cover of a Sid Caesar Broadway song went nowhere but March was young and had a booming voice that was worth another shot.  That would come like so many number one hits we spoke about by looking to Europe.

Petula Clark, who will be spoke about in greater detail later, had a number one hit in France (and yes, she sang in French) with a song called “Chariot” and it caught the attention of RCA producers, Hugo Peretti and Luigi Creatore, who adapted it in English for March.  Their adaptation featured more repetition and simpler lyrics, but that was exactly what made it work.

Someone of March’s age, and vocal ability could only do March’s youth and innocence made the song work as the devotion showed towards her man in the song.  This would be her biggest hit by far, and though she was a solo act, “I Will Follow Him” echoed a lot of the girl groups who were achieving similar popularity.  As mentioned, March would never come close to the popularity of that song, it was not like she was a “one and done” as far as Billboard was concerned.

Little Peggy March would have three more songs that would chart the Hot 100, but none of them would occur past 1964.  The teen pop queen would be done in America but would have European success later in his career.

Hey, it works for NBA players who can’t make the Association anymore who go to play in the European leagues to earn a solid paycheck, so why not musicians?

[1] The last name of March came from her birth month.  Peggy March has a better ring to it than Peggy November I suppose.

More in this category: « He's So Fine If You Wanna Be Happy »