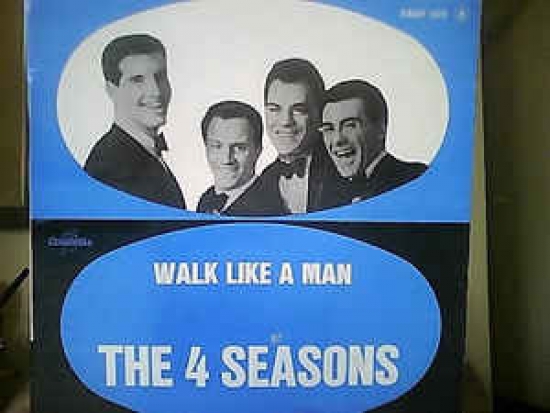 How is it that the Four Seasons could talk about walking like a man, when they sounded like a woman?

I have no idea what comic first said this, but it did resonate with me as to why I could never get into the Four Seasons, but with that being said, this will be the last time I trash the high-pitched vocals of Frankie Valli.  It echoed with a generation and after researching not just the band but also the era, let’s just say I have come to accept that I will never care for them but accept why people do.

Like the last two number ones, Bob Gaudio wrote the song with Bob Crewe producing it and it was also a major force on the R&B charts, going to number 3.  Incidentally, for the criticism that could be made on Valli’s falsetto, this was designed to counter that, as it was a father’s advice to his son, “To Walk Like A Man” and “Talk Like A Man” after he was dumped by his girlfriend.  Lyrically speaking, the song did work for the male set, especially the twenty somethings who had received similar advice from their male parent and thus had a more sophisticated quality than other rock songs of the era.

The Four Seasons would have one more number one hit left in them, leaving me an opportunity to do one final chat on the Jersey Boys, but I wonder if I am the only one who associates this song with a bad movie of the same starring Howie Mandel?[1]

Mandel’s film did give me one laugh that probably should not make me chuckle out loud but the combination of my male chromosome and “homage to fromage” makes it impossible to resist.  In that film, Mandel who plays a man named Bobo that was raised by wolves who needs to learn how to be civilized to gain a major inheritance had a scene where he was trying on pants and went into a change room where a middle-aged man was already there.

Yep.  Simple pleasures and the lowest common denominator will always bond the male gender.  I remember watching this movie on VHS (look that up kids) with my dad where we both though the film stunk like one month garbage but laughed at that scene.

I am pretty sure that we laughed at other fart like jokes too.

Those of you with Y chromosomes understand.

3/16/63: Puff the Magic Dragon by Peter, Paul & Mary reached #2 but climbed to the top of the Adult Contemporary Chart.

[1] Sorry Howie, but were you ever in a good movie?

More in this category: « Hey Paula Our Day Will Come »