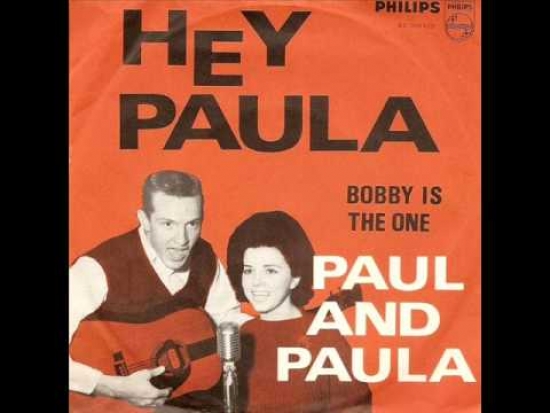 I am fairly confident that if my first name is Paul that I would go out of away not to date anyone named Paula.[1]  As it turned out, neither did Paul and Paula as their real names were Ray Hildebrand and Jill Jackson, which makes me wonder if there are any real Paul and Paula couples out there.  No matter, as this Texas duo managed to achieve the top of the Hot 100, which is an achievement few can state.

The story of Ray and Jill began when the pair were students at Howard Payne College in Brownwood, Texas where the pair would score regional attention with a song they wrote on a local radio station.  After that, the duo would make their way to nearby Fort Worth where they were signed by Major Bill Smith’s label who just was coming off a number one with Bruce Channel’s “Hey Baby”.

When the song was picked up nationally by Phillips Records, management believed that Ray and Jill singing about Paul and Paula seemed foolish, so they would change their professional names to “Paul & Paula”.   Quickly, the story of two young lovers with similar names who wanted to marry each other rocketed to the top of the chart and for the generation after Boon and Katy sang it to each other in Animal House, and it worked just fine for them and others despite not having the names of Paul and Paula.

You would initially think (at least I did anyway) that any song with your name in the title would almost signify a “one and done” in the music world as doing that on the surface seems equal parts narcissism and cheese, though when you look at the artists who did that it doesn’t always seem to be the case…well not the cheesy part of the equation anyway.

Here are a few artists who utilized their own names in songs and judge for yourselves based on your memories whether it was self-indulgent, self-deprecating or whether you even remember it at all.

“Theme from S’Express” by S-Express

Kind of all across the board isn’t it?

Paul & Paula would actually have another large sized hit with “Young Lovers”, a song that would peak a few months later at number 6, but by the next year they were not on the charts, not in the public consciousness, and likely collecting dust in Boon and Katy’s vinyl collection.  I wonder who got that album when they separated?

2/9/63: You’ve Really Got A Hold Of Me by Smokey Robinson and the Miracles reached #8 but climbed to the top of the R&B Chart.

[1] Who am I kidding?  In my teen years I would have dated a girl named dipshit.

[2] Ugh.  DEFINITLEY self-indulgent.  This is the exact case of someone who is not nearly as hot as she thinks (or was told) she is.

[3] I actually really like this song.  Paul Rodgers has one of the best rock and roll singing voices ever.

More in this category: « Walk Right In Walk Like A Man »