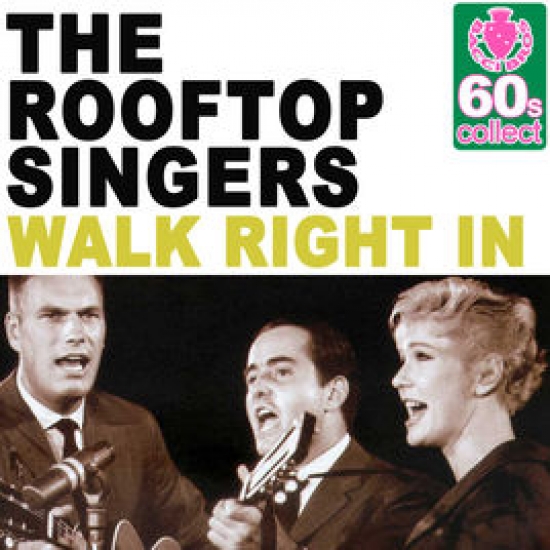 Could it be that we are already at the Beatles, and we are referencing their famed concert on the roof on 3 Savile Row? [1]

How about when U2 sang “Where the Streets Have No Name” on top off of a liquor store in Los Angeles.

Actually, it might be most memorable to the people who are reading this book that the B-Sharps reunited on the roof of Moe’s Tavern.[2]

No, to my dismay, none of these are accurate as the Rooftop Singers were a one hit wonder folk group who almost as soon as they became popular, quickly became irrelevant.  While the Rooftop Singers may have had only one hit, the lead singer Erik Darling was part of the larger folk music canon as he was the replacement of Pete Seeger in his group, The Weavers, and was a part of another folk group called the Terriers, which had a few minor hits of their own.

An old country song called “Walk Right In”, which was originally done in the late 20’s by Gus Cannon and his Jug Stompers, inspired Darling.  He would put together a group to make his vision of the song work and with updated lyrics and a new arrangement with a pop sensibility Darling’s version was a success.

The folk revival was in full steam and the Rooftop Singers would have their number one hit before the folk scene completely changed and this is one of those musical occasions where squeaking in under the wire is an appropriate analogy.  This wasn’t that they did not have some differing attributes from the other folk revival groups as they were multi gendered (two men and two women) and they embraced elements from jazz and blues to their style.

Even though you could draw differences between them and groups like the Kingston Trio, “the times they are a changin’”!  Bob Dylan was leading a folk revolution of his own and if you were a folk act who wasn’t politicized after 1963, the chances that you would be accepted as reputable were not very strong.

Incidentally, the fact that the Rooftop Singers have a number one and Bob Dylan doesn’t say so much about so many things doesn’t it?

[1] Yes John, you most definitely passed the audition!

More in this category: « Go Away Little Girl Hey Paula »