NASCAR Heat 5 and the Sad Lack of Stock Car Games 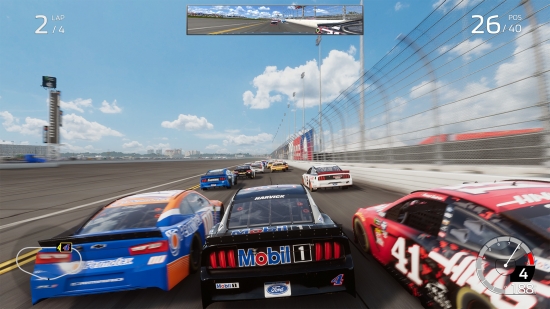 The history of NASCAR in video gaming is remarkably straightforward, Just four studios, EA, Eutechnyx, Monster Games, and 704Games, have created released a stock car racing game since NASCAR Thunder 2004, though there have been almost twenty different titles in the genre since then. Monster Games and 704Games have shared the honors since 2016, releasing NASCAR Heat 5 in July 2020.

Of course, that kind of linearity isn’t always a good thing. The same studios and personnel tend to produce similar products year after year. Perhaps inevitably, Heat 5 received average reviews, with Forbes describing it as “steady, consistent and safe”. This kind of franchise fatigue crops up often in sports titles. WWE 2K20, for instance, released in such a poor state that 2K temporarily suspended development on the next entry in the series.

Due to the dominance of NASCAR Heat, there are no other developers working on stock car games at present, for PC or consoles. The racing genre as a whole is healthy, though. Need for Speed Heat, Forza Horizon 4, DiRT Rally 2.0, and Asphalt 9: Legends all came out within the last few years. Old favorite Gran Turismo has been absent from the circuit since 2017, perhaps due to Sony’s preoccupation with the PlayStation 5.

Another major contributor to the world of virtual racing is the online casino. Gaming site Casino Masters has a number of slots based on cars, including Monster Wheels, Street Racer, and 5 Reel Drive. The former title, Monster Wheels, is a quirky creation inspired by the classic Wacky Races cartoon show while 5 Reel Drive focuses more on trucks. There’s also a character with more than a passing resemblance to Penelope Pitstop.

NASCAR fans have to look to mobile for relevant games but, once again, there isn’t much of a selection and they’re all indie efforts. If you don’t mind the lack of real vehicles and tracks, Thunder Stock Cars is a popular choice with Android users. It has variable difficulty and controls but there are no customization options to speak of. Thunder Stock Cars has a slightly above-average score of 3.9 on the Google Play Store.

Speedway Masters boasts impressive graphics for a mobile game but features similar banked tracks and cars to Thunder Stock Cars. It also has a first-person viewpoint, which can be an important feature for petrolheads. Pit stops, day/night cycles, and the opportunity to watch races rather than take part are fun extras. NASCAR Heat retains the license on mobile too, so don’t expect any official cars.

Overall, lovers of NASCAR don’t have much choice for games on any platform. It’s a disappointing situation for such a thrilling sport but there is hope in the shape of Motorsport Games’ as-yet-unnamed game. NASCAR Heat 6 will not be released due to the negative response to its predecessor. But, in its place, a brand new stock car title will attempt to win back fans’ hearts and, inevitably, dominate the market once again.

More in this category: « How To Start Your Music Career Awards = HOF?: Part Fifty-Nine: ALCS/NLCS MVP »