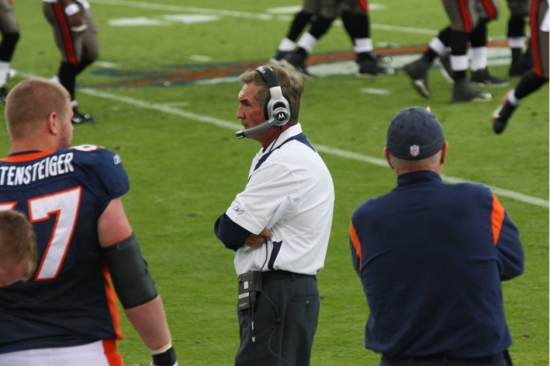 There have been numerous coaches in the NFL that have been regarded as the best of their time, or the best in their generation. While many of these coaches have made their way into the Hall of Fame, there are a number of them who should be there that aren’t.

Mike Shanahan, Andy Reid, Dick Vermeil, and many more, are just a few names of coaches that, for some reason, just haven’t been able to get their name in the Hall of Fame. this post will go through 5 coaches who should definitely be there.

The two-time Super Bowl winner barely needs an introduction. Mike Shanahan has been one of the most widely recognised names in coaches for years now, with his first career highlight coming at Super Bowl XXIX, where he was the assistant coach for the eventual winners the 49ers.

As a head coach though, he was at the helm of two Super Bowl victories while in charge of the Denver Broncos .Not only that, but Shanahan has been part of 10 teams that have played in 10 Conference Championship games. While later in career he was fired twice and was the head coach of two very unsuccessful teams, his legacy and success are undeniable.

A legend in San Francisco, George Seifert is one of the 13 coaches who has won more than one Super Bowl, winning it with the 49ers in both the 1989 and 1994 seasons. He is also one of the very few rookie coaches to win the Super Bowl.

He wasn’t only the head coach at the 49ers, as he coached on 5 different Super Bowl winning 49er teams. He spent a couple of seasons at the Carolina Panthers after his tenure in San Francisco, but didn’t see the success. He is still the only Panthers coach to not have a winning season or win a playoff game. However, his work in San Francisco will barely be emulated again.

Another man who needs little introduction, Dick Vermeil has won and done almost everything as a coach, except get his spot in the Hall of Fame. He coached the Eagles, the Rams and the Chiefs in his career, with his only Super Bowl win coming at Super Bowl XXXIV, when the Rams beat the Titans.

Another coach that has plied his trade across the league as an assistant, head coach, as well as an executive, is Mike Holmgren. Holmgren saw his only Super Bowl win come at Super Bowl XXXI, when he led the Green Bay Packers to Victory.

Last year, he was named a coaching finalist for the Pro Football Hall of Fame “Centennial Slate”, as was up again for this year's class, however, he was part of the group that was cut. What more must this man do?

A coach that didn’t win the coveted Super Bowl, Schottenheimer still 100% deserves to be in the Hall of Fame. he spent his coaching career across the league, taking charge at the Browns, the Chiefs, the Redskins, the Chargers, and also spent time in the UFL coaching the Virginia Destroyers.

He was also the mentor for many assistant coaches who went on to become NFL head coaches, including Bruce Arians, Bill Cowher, Mike McCarthy and Wade Phillips. Schottenheimer’s influence was felt on and off the field.

These are only a small selection of coaches that should definitely find their way into the Hall of Fame. While many of them had incredible individual players or teams that helped them find success, the huge influence that these coaches had can not be ignored.

While some have found their way into the respective Hall of Fame for a particular team they coached, it would be a serious shame if they didn’t make it into the NFL’s Hall of Fame, a position that most fans and experts believe they all seriously deserve.

More in this category: « The Richest Sportsman in the World The Star-Studded NBA Hall of Fame Class of 2020 »