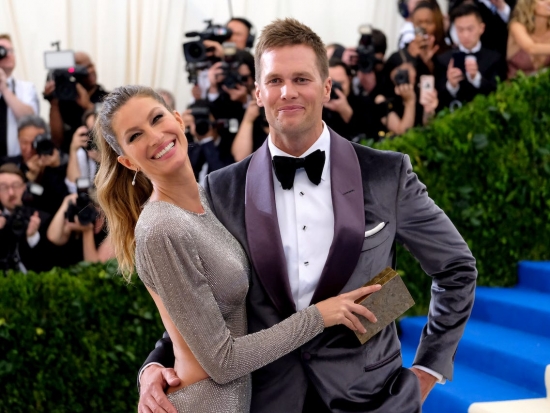 The Super Bowl is a special event in the culture of the USA. Hardcore football fans are waiting for it the whole year. Kids are playing football pretending they’re their favorite players months after the game is done. Women who aren’t into sports get sucked in the euphoria too. That’s the magic of the Super Bowl. It connects all football fans around the world.

But its magic is even more powerful than you’d think. Connecting football fans is one thing. Connecting lonely hearts is another. The Super Bowl does both. Thousands of couples met thanks to it. In bars, on stadiums, at home-parties. The atmosphere surrounding the Super Bowl is full of joy and excitement. It’s hard to be lonely at that time.

Now, let’s focus on two of the biggest stars in football and their love life to show you they’re human with feelings like you and I.

When you sign a $450,000,000 (yes, 450 million) contract at the age of 25 you won life. At least some people would consider that a complete victory. Patrick Mahomes, a quarterback of Kansas City Chiefs, isn’t like that. He knows money is great, but it’s not everything. Love is.

That’s why he and his high-school sweetheart stayed together through thick and thin. When Matthews went to Iceland to play soccer and Mahomes moved to play college football, it was hard to maintain a relationship. Yet, they did it. And they worked hard on their careers too. Patrick became the MVP of the NFL for 2018. He led the Kansas City Chiefs to the Super Bowl LIV. Where he played like a demigod, won, and earned the Super Bowl LIV MVP award. And now, he is doing his best intheSuper Bolw LV! Amazing achievements that are easier to achieve when you have a supportive long-term girlfriend cheering for you.

Patrick Mahomes is on the way to become an NFL legend, but his opponent on the Super Bowl LV is already there. While most professional athletes retire before they hit 40, Tom Brady isstill the man in Tampa Bay Buccaneersat 43. It’s amazing Tom still has the hunger for winning after achieving so much. Listing all his accomplishments is nearly impossible, so I’ll list the most meaningful:

Can his life be any better? Yes, because on top of all that, he’s married to one of the most beautiful beings in the world. Gisele Bundchen is the highest-paid model for years. She’s not a stranger to big achievements, but she’s also a great wife. Gisele and Tom have been married since 2009, which is a very long time in the world of superstars. Their unconditional support for each other is inspiring, but it also shows how important love is.

Is it Real to Date a Football Star if You are Far from a Sports Lifestyle?

More in this category: « Super Bowl LIV is coming THE NBA BIGGEST STAR AND EVEN THE UPCOMING, BLAST THE ALL-STAR GAME »