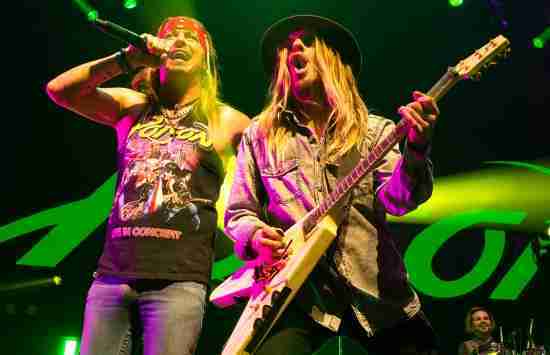 You've heard the saying, "Every man has his price"? For me, it's $20. At least that's what I was willing to fork over to see Poison and Cheap Trick at FivePoint Amphitheater in Irvine, California, on May 18. And for one of those bands, it was worth it.

Earlier this year, concert promoter Live Nation announced National Concert Week, an online promotion offering tickets for $20 (US) to a wide range of artists touring throughout the 2018 concert season. Ever-alert for bargains, my friend Kathie tipped me off to this limited-time offer, and soon we were deep into negotiations.

We eventually agreed on a quid pro quo: I would go to see Poison and Cheap Trick if she would go to see Deep Purple and Judas Priest, slated to play in Irvine later this year on September 27. Considering that both shows had a straight-up $20 charge with no fees and, as we discovered, the concert venue did not charge for parking, this was a fair price for a night out and some live commercial rock and roll.

Inducted into the Rock and Roll Hall of Fame in 2016, Cheap Trick proved that it was still a top-tier hard-rock band not about to "Surrender."

Opened in 2017, FivePoint Amphitheater in Irvine is the successor to Irvine Meadows Amphitheater, once also known as Verizon Wireless Amphitheater, but under any name closed for business in 2016 to make way for apartment complexes, thus depriving residents of south Orange County of a large-scale concert venue that had been in operation since 1981 and had hosted a broad range of musical tastes from the Pacific Symphony Orchestra to Michael Jackson, Miley Cyrus, and Adele to the Grateful Dead, Prince, and the Smiths. Nestled on the slope of a coastal foothill, Irvine Meadows was a pleasant outdoor locale where even the cheap seats, including the grassy terrace at the top of the seating area, kept you in the concert, particularly since the advent of video screens adorning the stage.

By contrast, FivePoint is a work in progress, although considering the development saga surrounding it, it is progress. This outdoor amphitheater is built on the remains of the El Toro Marine Base (officially Marine Corps Air Station El Toro), which dates back to World War Two and which sported four runways, including two that were nearly two miles in length and could accommodate any airplane up to the behemoth Lockheed C-5 Galaxy transport jet. That made El Toro a crucial domestic airbase throughout the Cold War. President Richard Nixon landed at and departed from El Toro in Air Force One whenever he visited his "Western White House" private residence in nearby San Clemente, and Lee Harvey Oswald, alleged assassin of John F. Kennedy, had been stationed at El Toro twice during his stint in the Marines in the late 1950s.

When it was announced in 1993 that El Toro would close by 1999, heated and protracted debate erupted over what to do with these more than eleven square miles of land—and in Southern California, land such as this is at a juicy premium.

One initiative was to re-purpose the existing facilities into a new international airport. Not a bad idea, as John Wayne Airport, which services Orange County, is a bandbox with a single runway just over one mile in length that is unable to accommodate any wide-body airliner, and as John Wayne is located smack-dab in the middle of urban Orange County, any expansion is practically impossible. (Kathie and I work in an office building minutes away from John Wayne, from which we can see airplanes making their final approach in between the office buildings.) As Orange County, no longer simply a collection of sleepy bedroom communities for Los Angeles to the northwest, has grown into a commercial hub, so too should its airport, which is minutes away from branch offices of Oracle, Microsoft, Google, J.P. Morgan, Ernst & Young, and many others, grow commensurately.

But for residents surrounding El Toro Marine Base, the idea of a commercial airport was anathema—in the 1980s, as the stretches of orange groves that gave the county its name were leveled to create many of those bedroom communities, newly-settled residents complained about the noise from El Toro, a complaint that only grew louder as this burgeoning population grew. So, naturally, these communities were opposed to a new airport, and a spirited wave of ballot measures and court challenges enlivened local politics until the airport initiative was quashed. In its place came the Orange County Great Park, approved by Orange County voters as Measure W in 2002, which would occupy a little more than one-quarter of the land that formerly housed the airbase, with that large remainder re-zoned for commercial and residential development.

What has any of this got to do with a rock and roll concert? Rock and roll is a business, folks, and in an era in which recordings do not generate as much revenue as do concert tours, where rock artists can play has importance, particularly for an Eighties hair-metal band such as Poison and a Seventies glam-rock band such as Cheap Trick, both of which rely on the nostalgia crowd for customers. And for members of those crowds who live in south Orange County, having a local large-scale venue to replace the late, lamented Irvine Meadows is a blessing, which is where Great Park, home to FivePoint, enters the picture.

That said, FivePoint, as noted previously, is a work in progress. Located in a lonely corner of the old airbase, it hardly has the look of permanence: The "amphitheater" is no more than three banks of steel bleachers arrayed in a semi-circle before a serviceable stage. Leading up to the bleachers is an encampment of concessionaire kiosks offering refreshments and souvenirs, with stands of portable restrooms nearby. A cross between a single-wide trailer and an airplane toilet, these restrooms are an improvement over the venerable Porta-Potty. But before our parents and grandparents begin to admonish us with their tales of Woodstock, of sleeping in the mud and rain with a half-million other Age of Aquarius pioneers, yet having the time of their lives, I am reminded that the concert experience has now become like the title of an old Dead Kennedys comp: Give Me Convenience or Give Me Death.

Presumably, after having been rushed into service after Irvine Meadows closed, FivePoint will grow into a permanent facility and not remain like the traveling carnival that sets up in the parking lot of your local shopping center, hawking dubious-looking hot dogs and cotton candy and sketchy rides on the Tilt-A-Whirl to help you bring up said junk food, then packs up for another town a couple of weeks later, leaving in its wake rampant indigestion and at least a couple of teen pregnancies. For now, FivePoint is a nearby venue for mid-level concerts, including one that featured a band recently inducted into the Rock and Roll Hall of Fame.

More in this category: « If I Had a Vote in the 2018 Baseball Hall of Fame Election Concert Report 2018: Deep Purple and Judas Priest »